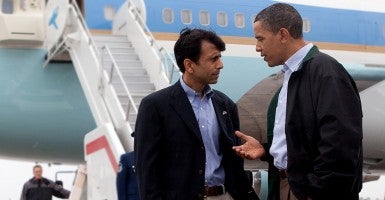 If he runs for president, Bobby Jindal says he’ll be ready to make the case that conservative policies help the most Americans.

The way the Louisiana governor sees it, by the time Republican and Democratic voters choose their 2016 presidential nominees, a crowded field of GOP candidates needs to have thoroughly aired issues of consequence to the nation’s future.

Jindal, speaking Monday to a dozen reporters gathered at The Heritage Foundation for a briefing on his new education reform plan, returned several times to the seriousness of what eventually will be the choice between a Democrat and a Republican to succeed President Obama in November 2016.

>>>  Bobby Jindal on Anti-Common Core Moms: ‘I Wouldn’t Bet Against Them’

“As Republicans, I think we need to make the point that our policies help every child who aspires to join the middle class,” Jindal said. “School choice, to me, is a great example … of a policy that is consistent with our principles but also benefits all kinds of children, all kinds of parents across the political spectrum, across every kind of line that the Democrats want to divide us by.”

I think this next election has to be a debate worthy of the voters. We’ve got important decisions to make. It’s not just going to be about who can tell the best joke or give the best speech. We had that election, and we got this president who needs six years of on-the-job training because he’s never run anything before.

We don’t need four more years of this. And I do think Secretary Clinton would be a continuation of that, by the way. Instead, we need a Republican Party that stands up and says we’re not a top-down party, we’re a bottom-up party that believes in the American people and freedom and the American dream—not being about a bigger, larger, more expensive government that’s all about redistribution.

“I think this next election has to be a debate worthy of the voters.”–@BobbyJindal

“What I don’t want us to do is say, ‘Well, if they’re willing to spend this much, we’ll spend half as much and call it less bad.’ You’ve seen that in the Obamacare replacement debate,” he said. “Some have already said, ‘Hey, look, it’s too late, you can’t repeal all the [Obamacare] taxes; he’s already created an entitlement program, so we’ve got to create one that’s smaller.’ That’s a mistake, to me.”

So, one reporter asked, why is the two-term Louisiana governor and former congressman struggling to gain traction among his party’s other unannounced White House hopefuls in early polls?

“Look, I live in a state that’s farther away from major media markets, I get it,” Jindal , 43, said:

I don’t think this election will be decided by the insiders. I don’t think the voters want the donors, the political consultants, the establishment, to pick their candidate, to clear the field. I know there are a lot of Republicans who are wringing their hands and say, ‘Well, this is messy. We might have too many debates and it might go on too long.’ Well, the reality is democracy is messy.

The nomination battle “is going to be a long process,” Jindal predicted, in part because the party has “more credible candidates than we’ve had in a long time” and none is “pre-ordained.”

The job of Republican primary voters will be to test and put forward an authentic, conservative alternative to the Democrats’ nominee, he said.

“The Democratic Party has made the decision that they want to be the party of the far left,” Jindal said. “You can see that in their policies, in small ways like on [the] Keystone [oil pipeline] and in big ways in terms of their blocking school choice and their doubling down on their failed policies as evidenced by the president’s [State of the Union] speech.”