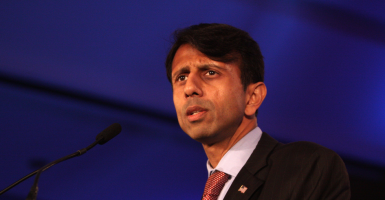 Louisiana Gov. Bobby Jindal, hoping that a push for education reform can set him apart among prospective Republican candidates for president, today begins to tout a national plan he says would create “an ecosystem of freedom and choice” for parents, students and teachers.

His proposals, Jindal says in the plan to be released this morning, would push the public education system out of “a rut” it has been stuck in for 50 years because of Washington’s ever-increasing involvement, which he sees as holding back generations of children.

“Reform along the principles outlined in this paper will restore the balance in education toward parents and teachers, and away from the bureaucracies that stand as obstacles to change,” Jindal says in the introduction to the plan, a copy of which was obtained by The Daily Signal. “Most importantly, it will give parents the power to choose from among many quality educational options, instead of taking away their power by keeping children in poor-performing schools.”

The bulk of the 42-page “K-12 Education Reform: a Roadmap” is divided into three sections devoted to what it calls the principles of parent choice, limited government and educator freedom.

In his introduction, Jindal emphasizes these guiding approaches:

The Jindal plan concludes the nation must heed, in addition to pressing economic and fiscal considerations for reform,  “a moral imperative to provide a quality education to each child.”

Government spending on public education is more than three times what it was in 1970,  the Jindal plan notes, yet the “sad truth” is that U.S. children continue to emerge as “mediocre at best” compared with other developed nations on the world stage.

Even as Jindal again condemned Common Core standards last week in a speech to the American Principles Project in Washington, D.C., CNN reported that critics note Louisiana’s school system continues to lag behind nearly every other state in K-12 achievement. The state finished 49th in an annual report from Education Week.

The plan emphatically calls on states to repeal Common Core and “restore” state and local standards, an issue that has put Jindal at odds in court with Louisiana’s school superintendent and school board.

The governor, who switched from supporting Common Core to seeking to pull his state from participating, recently sued the federal government over the issue.

The Jindal plan argues for reduced federal “meddling” and promotes control at the local level, as well as eliminating duplicative or coercive federal programs,  reducing government data collection and restoring student privacy rights in such data gathering, and improving the flow of information to parents.

It also calls for higher academic requirements for prospective teachers, evaluating and overhauling teacher preparation by emphasizing subject matter rather than general education, and repealing state and federal mandates for teacher certification.

“It’s about providing more opportunities for Americans to maximize their happiness and pursue their dreams.”[email protected]

The plan proposes  experimenting with more “practical” teacher evaluations at the local level, doing away with “lifetime job guarantees” for teachers, ending forced membership in teacher unions, and restricting collective bargaining to salaries rather than matters such as classroom temperature and the size of bulletin boards.

Other proposals include giving principals control over their own staffs and budgets, cutting laws and rules that restrict innovation, and eliminating most federal curriculum mandates and incentives that aim to bend state programs toward national models.

The Republican governor was set to introduce the details in two meetings today with reporters in Washington, D.C. – one at the regular newsmakers breakfast organized by the Christian Science Monitor, the other at a lunch at The Heritage Foundation co-hosted by The Daily Signal, the think tank’s multimedia news organization.

Updates: Between the two briefings, Jindal stopped by a daylong forum on school choice on Capitol Hill sponsored by Sen. Tim Scott, R-S.C., where he participated in the initial panel discussion.

One positive early review of the Jindal plan came from Lindsey M. Burke, Heritage’s Will Skillman fellow in education policy, who found it focused on “returning dollars and decision-making back to states and local leaders.” The plan cites two of Burke’s research papers.

“His proposal, critically, leads with parental choice,” Burke told The Daily Signal.  “It includes smart policy such as eliminating assignment-by-Zip code policies, having dollars follow students to educational options of choice, and unbundling education financing from the delivery of services. And it supports the most innovative education choice option to date: education savings accounts. ESAs empower parents with the ability to direct every dollar of their child’s state education funding to services and products of choice, and represent the next generation of school choice.”