Bobby Jindal on Anti-Common Core Moms: ‘I Wouldn’t Bet Against Them’ 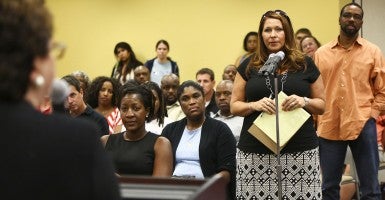 While promoting his new education platform today in Washington, D.C., Louisiana Gov. Bobby Jindal said more moms than ever are speaking out against the national education standards known as Common Core.

Of those moms, Jindal said, “I wouldn’t bet against them.”

The Republican governor took on the issue of Common Core while speaking to a small group of reporters at The Heritage Foundation about his new 42-page plan, “K-12 Education Reform: a Roadmap.” Although he hasn’t yet announced any 2016 plans, Jindal hopes his education agenda will set him apart among prospective Republican candidates for president.

The governor, who supported Common Core in 2012, said that in addition to the so-called “crazy right wing,” a growing number of teachers have withdrawn their support. There’s now a third “pesky” group taking on the national education standards: moms.

Now there’s a third pesky group called parents and moms that are against Common Core, and I wouldn’t bet against them.

After witnessing “hundreds” of moms show up at town halls to debate the issue and meeting with a group at the governor’s residence last week, Jindal said they also happen to be “the most eloquent, persuasive supporters of school choice.” School choice is a central pillar in Jindal’s new education roadmap, which aims to enable education dollars to “follow the child,” meaning they could be used as parents and families deem best—inside or outside conventional “government schools”—and for online learning and homeschooling.

While speaking to reporters, Jindal argued that school choice reaches beyond party lines.

“I got my first school-choice bill done in Louisiana with a Democrat-controlled legislature,” he said.

>>> GOP Must Champion ‘Every Child Who Aspires to Join the Middle Class,’ Jindal Says

The governor also said the tide is shifting with Common Core, believing it can be defeated not just in Louisiana but also across the country.

One of the reasons I’m confident we will get rid of Common Core is because it’s not just Republicans, it’s not just conservatives … it’s everyday moms and dads who aren’t political themselves who look at this and go, ‘They’re making a mess of my child’s education.’

In explaining why he flipped his stance on the national education standards—a decision that subjected him to criticism—Jindal compared it to the passing of Obamacare.

I think the concept sounded attractive to a lot of people—voluntary, state-led, high standards. What ended up happening instead is the federal government used this club of power to say if you want Race to the Top funding, if you want No Child Left Behind waivers, 85 percent of your standards now have to be Common Core and it’s not clear that you can change one thing in those standards.

But there was another reason Jindal changed his stance: He watched his own 7-year-old son lose credit for failing to explain how he arrived to the correct answer in a simple math question, as is required under Common Core.

“I really couldn’t reprimand him because he was right,” Jindal laughed.

As more parents are exposed to the “flaws” of Common Core, Jindal believes they’ll turn their backs on the national education standards and consider adopting his alternative education roadmap.

“It makes no sense in America today to have a one-size-fits-all approach to education,” he said.