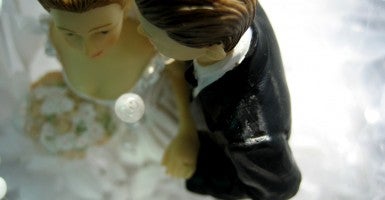 The owners of an Oregon bakery who declined to make a cake for a same-sex couple’s wedding celebration were found guilty last week of violating the state’s anti-discrimination law.

The bakery owners, Aaron and Melissa Klein of Sweet Cakes By Melissa, contend they were adhering to their Christian beliefs that marriage is between a man and a woman.

On Monday, the Oregon Bureau of Labor and Industries announced the couple will have to pay up to $150,000 for violating the Oregon Equality Act of 2007.

According to the Oregon Bureau of Labor and Industries, the exact amount will be determined at a follow-up hearing on March 10.

In an earlier interview with The Daily Signal, Aaron said the fine would bankrupt the couple and their five children.

In response to the decision made by the Oregon Bureau of Labor and Industries, Aaron and Melissa Klein posted a statement on their Facebook page:

The saga started in February 2013, when Rachel Cryer and Laurel Bowman asked the Christian couple to design a wedding cake for their same-sex commitment ceremony.

At the time, Oregon defined marriage as the union between one man and one woman, which voters overwhelmingly approved as an amendment in 2004. Although the couple maintains that their decision not to design and bake a lesbian couple’s wedding cake was grounded in their constitutionally-protected right to religion, they’re also arguing before the Oregon Bureau of Labor and Industries that at the time of the alleged discrimination, same-sex marriage wasn’t yet legalized in their state.

It wasn’t until months after the Kleins turned away Cryer and Bowman that a federal judge would declare Oregon’s amendment defining marriage as the union between a man and a woman unconstitutional, paving the way for same-sex marriages.

“Ironically, the state was in violation of its own anti-discrimination laws,” said Aaron Klein.

Adding somewhat of a twist to the story, Matt Stolhandske, who identifies himself as a gay evangelical Christian, is attempting to raise money to help the Christian couple pay the fine.

The Kleins say the $150,000 fee will bankrupt her family. I’m raising money to help offset that cost. I’ll send whatever we raise along to the Klein family with a message of love and peace. I don’t want them to suffer. But I am also pleading with them and other Christians to stop using the name of Jesus to explain to the LGBT community why we don’t deserve access to the civil rights afforded to heterosexuals through the legal institution of marriage.

I hope the Kleins will accept this sign of good will. After all, they must see that our goals here are the same – to live our lives as we see fit and be treated equally under the law.

Mr. Stolhandske offered to give the money to Aaron and Melissa, but they politely declined for various reasons including the fact that the [administrative law judge] had not yet determined that any amount of money was due.

Once that is determined on March 10, Harmon said the couple will know the “full financial impact” of the charges brought against them.