U.S. Should Join With These 3 Countries to Fight Back Against China 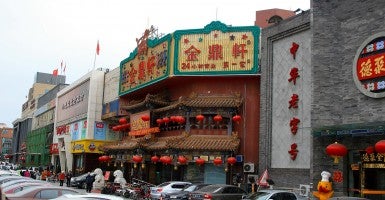 Face it. China is a problem. Nations across the Pacific and Asia are looking for constructive solutions. And that’s the promise of a Quad Dialogue—a forum for developing cooperative, synchronized policies among India, Australia, Japan and the United States.

Start with the facts. China’s economic policies are increasingly mercantilist. It is developing military capabilities to exclude others from operating in Asia. Beijing is no friend of democracy. From a Chinese perspective, all these initiatives might make sense: they are reconstructing a world that looks like the Middle Kingdom. The rest of the world, however, would probably prefer to live in the 21st century.

China is going to be China. That’s not going to change anytime soon. So unless the nations that have the power to punish bad behavior and take constructive steps, the neighborhood is going to get worse for everybody.

It’s past time to do something positive.

Interest in a four-way dialogue between India, Australia, Japan and the United States enjoyed a brief flurry of attention during the Bush administration. It quickly died, partly out of concern about antagonizing China. More fundamentally, there was no strong sense of common cause among the four powers.

When Barack Obama took over the Oval Office, the administration placed its bet on the Asian Pivot, the idea that refocusing American military, economic and diplomatic attention on the region would be enough to balance China.

Obama’s pivot came up short. The crises in the Middle East and the Ukraine both showed that the United States cannot focus the preponderance of its power on Asia without engendering serious risk in other strategically important parts of the world. Further, as a practical matter, the pivot has had zero positive impact on China. Perhaps the best example of that is China’s policy toward Hong Kong. Beijing has pretty much cast aside its commitments to honor the Basic Law that protected Hong Kong’s status, and China doesn’t seem to care what the United States or any other country thinks about that.

When it comes to working with China, Obama has hit a dead end. Meanwhile, recognition is growing in the capitals of India, Australia and Japan that there is common cause in addressing how China elbows its neighbors. Further, the nations of the Quad now instinctively share a common vision. Determining the future of Asia is not the birthright of any nation—least of all China.

If Asia wants to give peace a chance—it could be time to give the Quad another chance.

The Quad foundered last time before there was any coherent expression of what it should be. Part of bringing the Quad back will require a foundation of principles to get the dialogue off the ground.

First, the dialogue should focus exclusively on two issues—ensuring the freedom of the commons (air, seas, space and cyberspace) and establishing a common approach to resolving territorial disputes. Freedom of the commons and the peaceful resolution of territorial claims are the grease that can best keep the friction caused by China’s expectations in check.

Second, the dialogue ought to remain a dialogue. There is no need for a formal strategy. Containing China and balancing China, for example, are wasteful and unproductive notions. Nor is there any need for all the baggage of a formal alliance. The Quad will happen if the four countries can view China from a common perspective. That is enough to make it work. If they can’t, then this project doesn’t have a prayer in the first place.

Third, the Quad dialogue shouldn’t act like an exclusive club. The goal of the Quad is that all peaceable nations of Asia are equal, with the right to chart their own course without being dictated to by any overlord. There are many forums for dialogue and cooperation in Asia. The Quad should complement, not subvert or replace them. Remaining active and constructive participants in all these venues is part of what makes the Quad valuable.

Fourth, the objective of the Quad is simple: to promote a sustainable, liberal order that makes sense, that does not advantage some nations at the expense of others. Creating such a system, however, is not an end to itself. Relationships built on fair dealing and international norms serve little purpose unless the relationships also assure remedial action when bad actors don’t play by the rules. That’s the job of the Quad: to cry foul when China doesn’t play fair and do something about it.

Fifth, the Quad works only if its members are voices worth listening to. Each nation has to remain a net-provider of free-market economic growth, free and open civil society and responsible security.

Sixth, be prepared to argue with China. Beijing will take every opportunity to paint the Quad as a threat to China. The Quad has to be prepared to defend itself and its actions. In this way, it will earn Beijing’s grudging respect. If the Quad doesn’t stand behind what it says, there is little chance China will give it any more respect than Obama’s pivot.