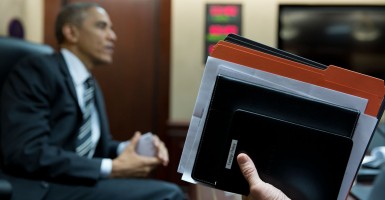 Today, the White House unveiled a document poorly suited to the challenges faced by the world’s superpower, which are mounting in the Middle East, Europe, Asia and Africa. At a time when American global leadership is increasingly being challenged by an array of adversaries, the new national security strategy sends a weak-kneed message on the world stage.

Far from presenting a coherent foreign and national security strategy, the Obama administration has merely offered a reheated and unconvincing version of its “leading from behind” approach, couched in the veneer of “smart power,” a phrase coined by former Secretary of State Hillary Clinton.

From the disastrous Russian reset, to the failure to halt the rise of Iran’s nuclear program, the Obama doctrine has projected weakness, indecision and dangerous mixed messaging. U.S. allies, from Israel to Great Britain, have been treated with indifference and disdain, while America’s enemies have been emboldened by what they see as an absence of U.S. power and influence.

At the core of the 2015 national security strategy (the first since 2010) is a failure to identify the enemy the United States and the free world faces in the Middle East, and increasingly in the West as well—Islamist terrorism and Islamist extremism.

The document steadfastly refuses to identify the ideological nature of the foe the United States is confronting, a brutal and vicious adversary that has made huge gains in Iraq and Syria under Obama’s watch, and is attracting tens of thousands of self-styled Jihadists from across the world, including several thousand from Europe. Nor does the document outline a concrete strategy for defeating Islamist terrorism, from Iraq to Nigeria and Pakistan to Yemen.

Any real strategic thinking is also notably absent from the White House’s approach toward Iran and Russia. The harsh reality is that the Obama presidency has no clear plan to halt Iran’s nuclear program or Russia’s imperialist agenda in Eastern Europe.

On Iran, Obama has pursued a policy of appeasement in the guise of nuclear negotiations with a tyrannical regime that has no intention of giving up its nuclear ambitions.

On Russia, the president has acted like a deer in the headlights while Putin’s tanks have rolled into Crimea, and his troops have marched into Eastern Ukraine in their thousands in support of Moscow-funded separatists. Obama has paid lip service to the NATO alliance while doing nothing to strengthen it.

The White House’s deeply flawed national security strategy is a reflection of a presidency in denial about declining American leadership on the world stage. It is the antithesis of Ronald Reagan’s peace through strength approach, and the mark of an administration that is content for the United States to take a back seat on the world stage, while the specter of terrorism and totalitarianism is on the rise.

The American people deserve a strategy that ensures the United States is kept safe, while its enemies are weakened and its allies strengthened. The new national security strategy, unfortunately, fails on all counts.