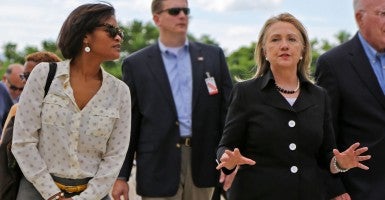 The House Select Committee on Benghazi announced that both Democrats and Republicans want to schedule the appearance of Hillary Clinton “as soon as possible.”

But first, says Chairman Trey Gowdy, R-S.C., the State Department must provide documents originally subpoenaed in 2013 so the materials can be reviewed in order to “constructively ask questions of Secretary Clinton.”

For the first time, the committee has also disclosed a partial list of executive branch, military, intelligence and State Department witnesses it intends to interview beginning as early as April 1. It includes Clinton’s top aides Cheryl Mills and Jake Sullivan. Former Deputy Assistant Secretary Raymond Maxwell told The Daily Signal that Mills and Sullivan together stopped by a Benghazi document-sorting session that he witnessed in the basement of the State Department. Mills, Sullivan and Clinton declined comment. Neither the State Department nor the Justice Department has publicly announced an effort to investigate the claim.

The Benghazi committee also announced that next week it will begin interviewing three dozen firsthand witnesses, including “brave Americans who survived the attacks … and others who can provide indispensable firsthand accounts of what happened before, during and after the attacks.” The committee has not publicly provided the names of these witnesses, who will be interviewed between Feb. 10 and April 1.

As early as April 1, the committee intends to begin interviewing the following (listed in alphabetical order). 3) Gen. Martin Dempsey: chairman of the Joint Chiefs of Staff. 4) Tom Donilon: former Obama national security adviser. He resigned on June 30, 2013, and was replaced by Susan Rice. In May 2014, he rejoined firm O’Melveny & Myers.

5) Benjamin Fishman: former member of White House National Security Council. He was the principal officer responsible for U.S. policy toward Libya. He left the NSC in 2013 and is now a consulting senior fellow at the International Institute for Strategic Studies.

6) Patrick Kennedy: undersecretary of state for management. Sources say that it was Kennedy’s decision to hold back the U.S.-based Foreign Emergency Support Team (FEST) during the Benghazi attacks. Obama officials later argued they couldn’t have gotten there in time to help and aren’t qualified for such a job anyway.

7) Charlene Lamb: deputy assistant secretary for international programs. Lamb was widely faulted as being in charge of the office that denied repeated security requests by U.S. personnel on the ground in Libya, including U.S. Ambassador Chris Stevens, who was killed in the terrorist attacks. 9) Cheryl Mills: former chief of staff to Secretary of State Clinton and former Hillary Clinton campaign adviser. She was also deputy counsel to President Bill Clinton and defended him during his 1999 impeachment trial. Mills left the State Department on Feb. 1, 2013. She joined BlackRock’s board of directors Nov. 20, 2013. 10) Michael Morell: former deputy director of the CIA who was in charge of coordinating the Benghazi talking points and removing references to terrorism. He provided Congress conflicting accounts of the process. Morell announced his retirement from the CIA on June 12, 2013. In November 2013, he joined Beacon Global Strategies, a public-relations group dominated by former Hillary Clinton and Obama officials. In January 2014, CBS News hired Morell as a contributor. 11) Michael Mullen: retired chairman of the Joint Chiefs of Staff who served as co-chairman of the Accountability Review Board. Mullen acknowledged coordinating with Clinton chief of staff Mills on at least one witness at the same time he served as independent co-chair of the ARB investigation. 14) David Petraeus: former CIA director who resigned Nov. 9, 2012, amid a sex scandal, shortly after Obama’s re-election. Petraeus had objected to changes made to the talking points by his deputy, Morell, and others. 15) Thomas Pickering: former U.S. ambassador who co-chaired the Accountability Review Board with Mullen. 16) Ben Rhodes: Obama deputy national security adviser. Belatedly produced documents show that Rhodes sought to steer blame for the terrorist attacks away from the administration and toward a spontaneous protest narrative. 17) Susan Rice: former U.S. ambassador to the United Nations who forwarded the incorrect narrative of the attacks as spontaneously inspired rather than acts of terrorism. In July 2013, she was promoted to Obama’s national security adviser. 18) Andrew Shapiro: former assistant secretary of state for political-military affairs. He left that post in 2013 and co-founded Beacon Global Strategies, the firm that also employs Morell. 20) Mark Thompson: leader of the State Department’s Foreign Emergency Response Team (FEST), which was not allowed to respond to the Benghazi attacks. He is also deputy coordinator for operations in the Bureau of Counterterrorism.