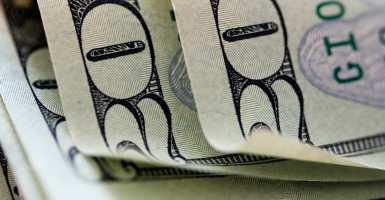 It is budget season in Washington and the debate is focused on who wants to increase spending and by how much.

Within mere days of the Congressional Budget Office’s warnings that spending is going up by three-quarters—from $3.5 trillion to $6 trillion—before the end of the decade, the president’s budget laid out an agenda for more spending on programs that fall far outside the federal government’s constitutional scope. The Budget Book, released by The Heritage Foundation today, stands in direct contrast to President Obama’s agenda of bigger government.

We believe that no spending cut and no attempt to right-size government is too small. When lawmakers stand up against entrenched special interests and eliminate bad government programs, even less expensive ones, this sends a powerful message to the people in this country that lawmakers are working for them in the best interests of the nation.

The Budget Book offers members of Congress who pledged to get government spending under control 106 ways to put that promise into action.

It’s time for Congress to prove to the American people it is serious about fixing the Washington spending and debt crisis. Congress can make that case by cutting federal programs that benefit the few well-connected at the cost of the many families struggling to pay their bills. And by doing so, it can earn the moral authority to tackle the massive spending challenges posed by Medicare, Medicaid and Social Security.

6. Increase Use of Performance-Based Logistics: $9 billion

15. Return Funding for the Office of Nuclear Physics to Fiscal Year 2008 Levels: $95 million

29. Reduce Funding for the Office of Nuclear Energy: $293 million

34. Eliminate Funding for Development and Implementation of New Ozone Standards

69. Close Down the Maritime Administration (MARAD) and Repeal the Jones Act: $150 million

83. Eliminate the PLUS Loan Program: -$3 million

96. Eliminate Grants within the Office of Justice Programs (OJP): $1.358 billion

98– 102. Reduce Finding for Five Programs in the Department of Justice: $787 million