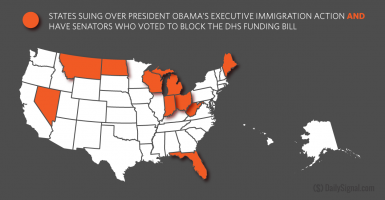 Twenty-six states are suing the federal government over President Obama’s executive actions on immigration, but U.S. senators representing 10 of those states are taking the opposite approach in Washington.

“We have senators from states going against what their constituents want and what their state attorney generals or governors are doing,” says @HvonSpakovsky

Lawmakers in Florida, Indiana, Maine, Michigan, Montana, Nevada, North Dakota, Ohio, West Virginia and Wisconsin—states that have all signed onto a lawsuit that alleges the president’s immigration plan is unconstitutional—have twice blocked debate on a bill that would fund the Department of Homeland Security while also undoing Obama’s immigration actions.

Hans von Spakovsky, a senior legal fellow at The Heritage Foundation who has closely followed the lawsuit, said these senators are not working in the best interest of the people back home.

He told The Daily Signal: “The polling shows that Americans are overwhelming against what Obama has done. Yet, we have senators from these states going against what their constituents want and what their state attorneys general or governors are doing.”

Senators from the 10 states include: The 26 states involved in the lawsuit claim that Obama has “unilaterally suspend[ed] the immigration laws as applied to 4 million of the 11 million” illegal immigrants in the United States.

The lawsuit, filed in the U.S. District Court in the Southern District of Texas, was brought by governors and attorneys general in these states. The plaintiffs are currently awaiting the court’s decision about whether to accept an injunction—which would prevent Obama from carrying out his executive actions until the case is settled—along with a ruling on the Justice Department’s request to dismiss the case entirely.

Sen. Angus King, an Independent from Maine who caucuses with Democrats, was among the 12 senators to block the Homeland Security funding bill Tuesday and again Wednesday. His state is suing over Obama’s immigration actions.

Of his decision to prevent debate on the legislation, King said in a press release:

The Department of Homeland Security plays a critical role in protecting Americans from the serious threats that confront our nation each and every day. That’s why I simply cannot understand why we would jeopardize their ability to plan and operate missions that range from preventing terrorism and blocking cyber-attacks to managing our borders and ensuring national emergency preparedness. King, who in the past cited “constitutional concerns about where prosecutorial discretion ends and unconstitutional executive authority begins,” did not respond to The Daily Signal about whether he supports the state’s lawsuit against the Obama administration.

Along with Senate Democrats, King is calling for Congress to draw up a “clean” bill that would separate Department of Homeland Security funding from the immigration language.

Republicans pushed back on the proposal, calling out Democrats for their refusal to even debate the matter.

“You can’t protect the country if you refuse to even debate the bill,” Sen. Roy Blunt, R-Mo., said Tuesday in a press conference. “So often in the last Congress we were accused of not being ready to end the debate … but we were seldom accused of not having the debate.”

The bill, H.R. 240, failed to get the 60 votes needed to overcome a filibuster. Senators voted 51-48 on Tuesday and 53-47 on Wednesday. Republican leaders plan to bring it up for another debate today.

Homeland Security funding expires Feb. 27. Until then, Republicans plan to press their Democratic colleagues to change their minds and take up the issue for debate.