20 Percent of Children Are on Food Stamps. Here’s How to Change That. 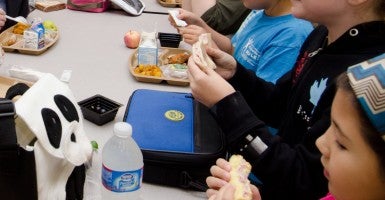 According to a Census Bureau report released last week, 20 percent of American children received food stamps last year. More than half these children, approximately 8.6 million, reside in a single-parent household.

This report is a stunning reminder of the vital role marriage plays in combating child poverty and the expansion of welfare rolls. Children in single-parent homes are about six times as likely to be poor than their peers in married-parent households.

Today, more than 40 percent of children are born outside of marriage. Most unwed childbearing occurs to women with a high school education or less–those who will struggle most as single parents. Restoring a marriage culture is essential to reducing poverty and enabling American families to pursue self-sufficient livelihoods.

The breakdown of marriage is a leading cause of child poverty. Government spent about $330 billion on welfare benefits for single-parent families in fiscal year 2011.

As The Heritage Foundation’s chief economist, Steve Moore, writes, marriage is “the surest economic stimulus.” Children in married-parent homes are roughly 80 percent less likely to be poor. This is the case across education levels. Children in married-parent families are also more likely to thrive: They are more likely to graduate from high school, attend and graduate from college and avoid behaviors that would hinder success, such as drug use and early sexual activity.

Unfortunately, the importance of strengthening marriage is often ignored in discussions surrounding poverty. Marriage must be strengthened if we are to transform the marriage culture and decrease welfare dependence. Marriage initiatives that include campaigns to communicate the importance of marriage and the risks associated with unwed childbearing would be good places to start.

Welfare programs themselves should be reformed so they do not undermine marriage. Today, some programs penalize couples if they do marry. In a recent paper, Heritage’s Robert Rector suggests how to begin reducing such marriage penalties in the welfare system.

Finally, to help reduce government dependency, welfare programs should have work requirements for able-bodied adults. Work requirements institute a reciprocal relationship between the taxpayer and welfare recipient and are essential to convey expectations that public assistance is temporary and directed toward restoring self-sufficiency.

More than the creation of additional government welfare programs or increased funding for existing ones, marriage—raising children with a married mother and father in the home—will protect them against poverty.