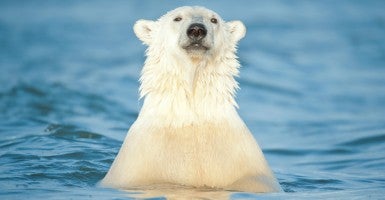 It was just recently that President Obama took credit for falling gas prices in his State of the Union address, and already he is sticking another knife in the back of America’s domestic oil and gas producers — to say nothing of the residents of Alaska.

Obama’s latest anti-fossil-fuels directive is to move off-limits to exploration and drilling some 12 million acres in Alaska’s Arctic National Wildlife Refuge. This is one of the most oil-rich regions in the world. The area to be removed from drilling is larger than the combined land area of Connecticut and Massachusetts. Alaska’s economy is already softening because of low oil prices; now he tosses the state’s drowning economy an anchor.

Obama says his motivation is to keep this land environmentally undisturbed and to protect wildlife — as if he were a modern-day Theodore Roosevelt–style preservationist. “Alaska’s National Wildlife Refuge is an incredible place — pristine, undisturbed,” Obama says. “It supports caribou and polar bears, all manner of marine life, countless species of birds and fish, and for centuries it supported many Alaska Native communities. But it’s very fragile.”

Well, no, not really. Think of a football field, and then think of placing a postcard on that field. This is roughly the size of the development footprint required to drill in these wilderness lands, compared with the entire Alaskan landmass. Thanks to horizontal drilling, the footprint from oil and gas production is getting smaller all the time. Drilling will hardly alter the majesty of the mountains or the forest lands.

Would oil and gas drillers kill off the eagles, caribou, and polar bears, as the White House warns? These were the arguments made more than 40 years ago against building the Trans-Alaska Pipeline System — which carries oil from Alaska’s North Slope to the port of Valdez for shipment to the lower 48 states. Over the last 35 years it has carried more than 17 billion barrels of oil, a quantity worth nearly $1 trillion in today’s dollars. At the time, the Sierra Club moaned that the pipeline would mean “the wilderness is forever broken,” while the Wilderness Society said the project would lead to “imminent, grave and irreparable damage to the ecology, wilderness values, natural resources, recreational potential, and total environment of Alaska.” No bird or caribou would be safe from the carnage. Sound familiar?

Instead, the impact on Alaska’s wildlife and natural beauty has been almost nonexistent. A study delivered in 2002 to the American Society of Civil Engineers found that “the ecosystems affected by the operation of TAPS and associated activity for almost 25 years are healthy.” Today the size of the caribou herd in Alaska is estimated at about 325,000 — four times the number before the pipeline was built.

It turns out that the radical greens in and out of the White House are dead wrong. Nature is not fragile; it is resilient, durable, and adaptable.

So what’s really going on here? This latest White House move isn’t about saving polar bears. It’s about a radical climate-change agenda to stop all domestic oil and gas drilling and coal mining, wherever and whenever possible. The middle-class Americans who will lose jobs or pay more for gas at the pump are collateral damage.

Alaska senator Lisa Murkowski calls this White House maneuver “a stunning attack on our sovereignty and our ability to develop a strong economy . . . for our children and our grandchildren.” She’s right, of course, and it’s not only Alaska’s children and grandchildren who will suffer, but all future generations of Americans. Meanwhile, Vladimir Putin and the leaders of ISIS and OPEC are smiling — and not because they care about elk and polar bears.