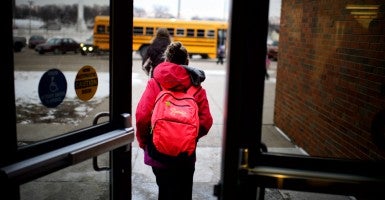 A good primary and secondary education is the cornerstone of the American Dream: it prepares us for economic and personal success and facilitates our pursuit of happiness.

Most parents are powerless to influence the quality of their child’s education.

But too often the history of America’s public school system has been a story of dashed hopes, deferred dreams, and unfulfilled promises. Hopes of parents—that the local school system would prepare their kids to climb higher than they ever could. Dreams of students—that their teachers would inspire and believe in them. And promises of policymakers—that more money would fix a fundamentally broken system.

Millions of low-income families who are stuck in underperforming schools have no way out and no way to choose something better.

These families are not just let down by our nation’s dysfunctional education policy—they are trapped by it.

Providing a solid education for the next generation is, as Abraham Lincoln once wrote, “the most important subject which we as a people can be engaged in.”

Policymakers should aim, as he did, “to see the time when education, and by its means, morality, society, enterprise and industry, shall become much more general than at present.”

That’s why I recently introduced in the Senate a bill that would empower the people most acutely committed to the quality of our education system: America’s moms and dads. My colleague on the other side of the Capitol, Rep. Luke Messer, R-Ind., has introduced a companion bill in the House.

By giving parents more power to invest in their child’s education and to choose what school best meets their needs, the Enhancing Educational Opportunities for All Act takes an important step toward restoring accountability to our public education system—something that has been missing for far too long.

Under our current system—which has remained essentially unchanged since President Lyndon B. Johnson signed the 1965 Elementary and Secondary Education Act—most parents are powerless to influence the quality of their child’s education. What occurs in public school classrooms around the country—what teachers teach and how they teach it—is the result of a long, convoluted, bureaucratic chain of command that zigzags its way from Washington to local school districts, but never includes parents.

Next, state officials refine—or in some cases distort—these Washington directives, writing narrower rules for their school districts, which then establish the specific policies for individual schools.

At no point in this decision-making process are parents consulted.

The problem facing our public school system today is not about a lack of money. The problem is dysfunctional government policy.

Instead, they are left with a “take it or leave it” choice: either accept the education offered at the local public school—no matter how bad it may be—or buy a better alternative, by moving closer to a better school or paying private school tuition.

For America’s most affluent families, this is no big deal—they can afford private schools and so have the power to choose the school that is best for their children. For everyone else, it precludes parents from making choices about their children’s education.

So our bill would expand school choice to all parents, regardless of socio-economic status or zip code, by allowing federal “Title I” K-12 support funds to follow low-income students to any public or private school of their choice.

Our bill would give working parents more opportunities to invest in a variety of learning services and products outside the classroom, such as tutoring, online courses and textbooks.

The problem facing our public school system today is not about a lack of money—we have nearly tripled our investments in elementary and secondary students since 1970. The problem is dysfunctional government policy—however well intentioned—and a lack of accountability.

And that’s exactly what we should expect when Washington bureaucrats have more control than parents over a child’s education. We have a moral and economic obligation to flip this equation and put parents back in the driver’s seat.

For when we tolerate a system in which the quality of a child’s education depends on her parents’ zip code, we fail to live up to the ideals at the heart of American exceptionalism.

And when millions of children learn from a young age not to dream big, but to surrender to the hopelessness of low expectations, we will live in a society where upward mobility is no longer rule but the exception.

We can and we must do better.