Obama to Immigration Agents: Ask Illegal Immigrants If They Qualify for Executive Amnesty 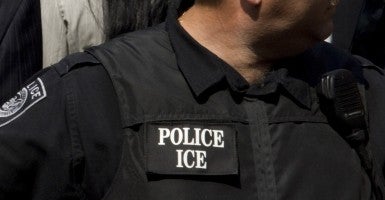 There’s been a shocking turn in the enforcement of U.S. immigration laws.

“The Obama administration has ordered immigration agents to ask immigrants they encounter living in the country illegally whether they might qualify under President Barack Obama’s” executive amnesty, reported the Associated Press Wednesday.

Reporter Alicia Caldwell wrote that these new policies “mark an unusual change for U.S. immigration enforcement, placing the obligation on the government for identifying immigrants who might qualify for lenient treatment”– aka temporary amnesty and all that goes with it, including work authorization and access to some government entitlement programs.

“It’s akin,” Caldwell continued, “to the Internal Revenue Service calling taxpayers to recommend they should have used certain exemptions or deductions.”

But it’s actually far more twisted than that.

Just imagine the outrage that would follow an announcement by a future president to no longer enforce capital gains tax laws and provide law breakers with an official order of protection from prosecution. Such actions would use the same logic as Obama’s argument for not enforcing U.S. immigration laws. Now imagine that after such an order, that president ordered the IRS to first ask tax evaders if they might qualify to for the president’s order of protection.

And yet that is what the Obama administration has ordered its immigration officers to do. U.S. immigration laws and immigration enforcement agents now exist to serve those who have broken the law, not U.S. citizens and law-abiding immigrants.

Immigration agents, who will be hard pressed to determine who is lying and who is telling the truth, will be even further crippled in their ability to enforce the law. It brings a whole new meaning to the law enforcement mantra “to protect and serve.”

It is such radical lawlessness with which Congress must contend and there is only one real solution: Congress’s power of the purse.

Yes, there are other minor ways Congress can flex its muscles like rejecting cabinet members who support the president’s amnesty or suing the president, but these approaches are unlikely to be effective and have nowhere near the authority of the purse strings.

The House has done its job by passing a Department of Homeland Security (DHS) funding bill that denies funding for Obama’s executive amnesty. Now the Senate should consider whether or not it will cede de facto legislative power to the executive and abandon the rule of law.

It’s irrelevant whether senators approve or not of the contents of the president’s policy. All should recognize the travesty it is for the separation of powers.

Yes, the president has promised to veto DHS funding unless it gives him exactly what he wants. That shows just what his priorities are: amnesty over security. The vast majority of DHS will continue to operate without funding, but Obama would rather hold on to his executive amnesty than actually make critical improvements to the department.

Even now we are seeing Obama expand his lawlessness and waste DHS’s time by not only ignoring U.S. immigration laws, but also ordering officers to help those who have broken the law.

Will Congress allow such lawlessness to continue and grow-or will they act to defend their constitutional prerogatives and the rule of law?