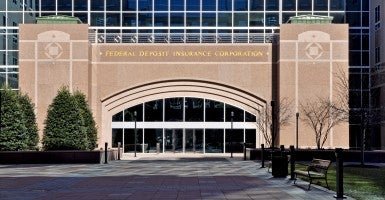 The Federal Deposit Insurance Corp. has acknowledged its role in Operation Choke Point and is taking dramatic steps to reverse its policies in targeting legal and legitimate industries that are disfavored by the Obama administration.

“We’re very pleased they’ve acknowledged their wrongdoing and they’ve accepted our suggestions to put in place measures to stop this activity,” Rep. Blaine Luetkemeyer, R-Mo., told The Daily Signal in a phone call this morning.

Luetkemeyer, a member of the House Financial Services Committee and leader in the fight to end Operation Choke Point, met with FDIC Chairman Martin Gruenbery and Vice Chairman Thomas Hoenig earlier today as a follow-up to concerns voiced last November.

The Justice Department contends that Operation Choke Point combats unlawful, mass-market consumer fraud by “choking” their access to banking systems. But a report by the House Oversight Committee found the program’s targets, under direction of the FDIC, included legal businesses such as short-term lenders, firearms and ammunition merchants, coin dealers, tobacco sellers and home-based charities.

To address concerns raised about Operation Choke Point, the FDIC will now require bank examiners to put in writing any recommendation or requirement for an account termination.

The examiner will also be required to indicate what law or regulation they believe the bank or the customer of the bank is violating.

The policy shift was announced today in an official Financial Institution Letter sent to all FDIC supervisory staff. In it, the FDIC states:

The FDIC is aware that some institutions may be hesitant to provide certain types of banking services due to concerns that they will be unable to comply with the associated requirements of the Bank Secrecy Act (BSA). The FDIC and the other federal banking agencies recognize that as a practical matter, it is not possible for a financial institution to detect and report all potentially illicit transactions that flow through an institution.

The letter reiterates that decisions on accounts need to be made on a case-by-case basis and stresses they should not be made based on industry or moral objection.

The Daily Signal has reported multiple cases of legal business owners being dropped by their banks and payment processors simply because their industry is considered a “reputational risk.”

Emails unearthed by investigators showed employees scheming to influence banks’ decisions on who to do business with by labeling certain industries “reputational risks,” ensuring banks “get the message” about the businesses the regulators don’t like, and pressuring banks to cut credit or close those accounts, effectively discouraging entire industries.

“The FDIC has allowed a culture within their agency to blossom that they believe it’s OK to impose their personal opinions and value system in a regulatory way,” says Luetkemeyer. “They are not a regulatory police—their job is to enforce the law.”

Luetkemeyer left his meeting this morning pleased that the FDIC has implemented the majority of his proposed policy changes administratively, but says he still intends to move forward with a bill introduced last year that aims at ending Operation Choke Point. The Missouri congressman, who has a background in banking, told The Daily Signal he will work with Chairman Jeb Hensarling, R-Texas, and Rep. Sean Duffy, R-Wis., to pass that legislation in the coming weeks.

The bill will affect other regulatory agencies in addition to the FDIC, and would also provide a legal basis for citizens to take action against banks or regulatory institutions.

“While these other agencies are not necessarily the main problem with Choke Point, they have been implicated in a story or two and therefore we need to have this bill in place to stop them from being a part of this activity as well,” says Luetkemeyer.

Luetkemeyer says the FDIC also intends to work with the Justice Department’s inspector general to investigate Operation Choke Point and hold those within the FDIC accountable for any wrongdoings.

“We’re pleased that they’re working with the [inspector general] so that they can change the culture of what goes on in their agency,” he said. “But we’re not going to take anything off of the table until we get this program stopped.”