Your 529 Plan Is Safe. Here’s Why the White House Changed Course. 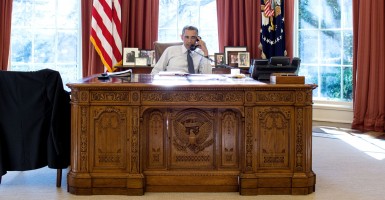 President Obama is abandoning his controversial plan to tax the interest on 529 savings accounts, the White House announced Tuesday.

The 529 plans are savings accounts in which parents and families can invest after-tax dollars. If the money is used for specified college costs, they don’t have to pay federal tax on the interest accumulated in these accounts.

The president’s proposal, which faced bipartisan opposition, would have “effectively end[ed]” the plans, according to the New York Times.

“Given it has become such a distraction, we’re not going to ask Congress to pass the 529 provision so that they can instead focus on delivering a larger package of education tax relief that has bipartisan support, as well as the president’s broader package of tax relief for child care and working families,” a White House official told the New York Times.

Earlier on Tuesday, House Speaker John Boehner, R-Ohio, said that 529 plans “help middle-class families save for college,” and said that taxing these accounts should not be included in the president’s budget proposal.

Lindsey Burke, the Will Skillman fellow in education policy at The Heritage Foundation, said that the president’s plan would have hurt middle-class families.

“Taxing college savings accounts would have created disincentives for those who save for college in favor of the federal government directing college spending, lending and handouts—through proposals like ‘free’ community college and student loan ‘forgiveness,’” Burke told The Daily Signal.

“It became clear pretty quickly that the proposal to tax college savings accounts in no way benefited middle-income families,” Burke added. “Families who have diligently worked to save for their children’s college education would have been penalized under this proposal. It seems, at least for the moment, that the administration is dropping its quest for this bad policy.”

Corie Whalen Stephens, a spokeswoman for Generation Opportunity, said taxing the interest on 529 plans hurts middle-class students and their families.

“It’s encouraging to see our president respond to the needs of our generation by dropping his ill-conceived idea to tax 529 college savings plans. His misguided proposal, intended to fund his unaffordable government policies, would have fallen squarely on the backs of middle-class students and their families,” said Stephens.

She added that funding a broken system doesn’t help students.

“Finding new ways for the government to finance a failing higher education system isn’t a solution. In fact, these endless subsidies with no reforms attached to them are the problem. To fix this, our leaders must look to policies that foster innovation and competition to lower overall costs—not repackage failed big government policies,” said Stephens.