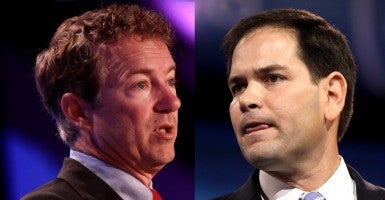 U.S. relations with Cuba provided one of the few flash points last night as three Republican senators with their eyes on the White House met in California for a forum sponsored by conservative campaign donors.

“I’m kind of surrounded on this one,” Sen. Rand Paul of Kentucky quipped as he sat between his Cuban-American colleagues, Sen. Ted Cruz of Texas and Sen. Marco Rubio of Florida.

Of the three, Paul alone supported President Obama’s normalization of relations with Cuba.

Cruz and Rubio are both the sons of fathers who fled Cuba when it was under Fulgencio Batista, the dictator toppled by Fidel Castro’s communist revolution in 1959.

The three potential GOP candidates for president sat onstage at a Palm Springs resort before an audience of about 450, answering questions from ABC News’ chief White House correspondent, Jonathan Karl, for a little over an hour in a mini-preview of the more crowded candidate debates to come.

>>> Obama’s New Cuba Policy: What You Need to Know

Paul and other backers of Obama’s move in both major parties note that the U.S. diplomatic, trade and travel embargo on Cuba failed to push Fidel Castro and his brother Raúl from power.

“The Castros are brutal dictators,” said Cruz, whose father fled Cuba in 1957, arguing that a renewed stream of American dollars will serve only to prop up the Castro regime, not end its repression of the Cuban people.

Rubio, whose parents left Cuba in 1956 and whose state is home to tens of thousands of Cuban exiles, suggested it is naïve to believe Obama’s policy change can bring democracy to the island nation.

“Cuba is 90 miles from our shores,” Rubio said, and “what happens there we will feel immediately.”

“Diplomacy is a good thing, not a bad thing,” @SenRandPaul says.

The in-person confrontation between Rubio and Paul on Cuba was far tamer than their tangle in the media immediately after the president announced the new U.S. policy.

Cruz and Rubio also differed sharply with Paul on Iran – specifically in his support of Obama’s call for no more sanctions on the regime while the U.S. attempts to negotiate an end to Iran’s drive toward acquiring nuclear arms capability.

On the domestic front, the three largely agreed on the need to lower taxes, reform the tax system and address income inequality.

The private forum, with video of their exchanges streamed to media outlets, capped a meeting of Freedom Partners, a group of business and financial executives organized by billionaire brothers Charles and David Koch to contribute to conservative candidates and causes. (ABC News posted a transcript here.)

Wisconsin Gov. Scott Walker, another potential Republican candidate for president, also spoke to the group in a separate session that was not streamed to media.

Note: This post has been modified, including to correct when the fathers of Cruz and Rubio fled Cuba.

>>> Commentary: Cuban Dissidents at State of the Union Show Outrageousness of  Obama Support for Castro