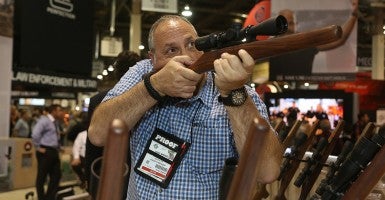 “We continue to hear from dealers and others in our industry that suddenly, out of the blue, they have been cut off by financial services or credit card processors or banks,” said Larry Keane, Senior Vice President of the National Shooting Sports Foundation.

We continue to hear from dealers and others in our industry that suddenly, out of the blue, they have been cut off by financial services. @lkeane

The National Shooting Sports Foundation, which exists to protect and preserve hunting and the shooting sports industry, is conducting a phone survey of over 7,000 of its members to determine the extent to which Operation Choke Point is affecting their industry. He said:

This is a direct result of the Department of Justice initiative, through the [Federal Depositors Insurance Corporation], to pressure financial institutions to stop doing business with legitimate law-abiding federally-licensed firearms dealers.

As The Daily Signal previously reported, gun sellers allege that they are being explicitly prohibited from using payment systems such as PayPal and Square to process credit card transactions.

>>> Firearms Sellers Say They’re Being ‘Choked Out’ From Payment Processors

The Justice Department, which spearheads this operation, maintains that Choke Point does not target businesses operating within the bounds of the law—only cases of fraud.

But accounts shared with The Daily Signal at the 2015 Shot Show, which boasted nearly 64,000 attendees, suggest the collateral damage caused by Operation Choke Point is a cause for concern. Patrick McWilliams, a veteran of the U.S. Marine Corps and owner of SBR Tactical in Corpus Christi, Texas, told The Daily Signal that within one year, he was booted from Square, PayPal, and Intuit.

“I’m just that lucky I guess,” he joked.

McWilliams then came across Payment Alliance, one of the few gun-friendly payment processors that exists.

Since companies like Square and PayPal added firearms sellers to their “prohibited industry” list, Payment Alliance, which has been in business for nearly a decade, has experienced record growth.

“I hate it for the gun industry, but it’s our best source of business,” said Krista Lowery, a vice president at Payment Alliance.

I hate it for the gun industry, but it’s our best source of business. @PaymentAlliance

Lowery told The Daily Signal that she receives three to four new customers every week due to anti-gun payment processors dropping or freezing her customer’s accounts. People in the firearms industry are now proactively seeking out gun-friendly payment processors such as Payment Alliance.

“I watched what happened to other people in the industry—whether they were gun sellers or other trainers who started to have difficulty with those services—and as a result, I knew that I had to be particularly cautious,” said Paul Carlson, a firearms safety instructor from Chargrin Falls, Ohio.

Instead of going to Square or PayPal—as he might have pre-Operation Choke Point—Carlson went to Payment Alliance. He said:

I’m still indirectly affected by it…It’s one of those things that impacts my business and I have to keep it in mind when I make business decisions…that I could face potential hardships in the future if I make a poor choice. In order to operate, gun-friendly payment processors take extra precautions to partner with banks that don’t discriminate against firearms merchants.

“It’s 100 percent of our business to make sure Payment Alliance is firearms friendly,” Lowery said.

The company, PistolPay.com, offers a phone app called Revolvr, which is a mobile firearm accessory marketplace.

In order to provide services for an industry deemed “high risk” by federal regulators, Goodstadt told The Daily Signal that he is also required to charge his customers higher fees.

The banks that we use to provide as a source for firearms industry processing classify firearms and firearms accessories as ‘high risk,’ which they then use to justify charging a higher percentage rage than a non-firearms business.

Goodstadt said the difference in charges can range from a whole 1.75 percent for a non-firearms seller to 2.75 percent for online firearms dealers, and sometimes higher depending on the business history of the customer. What Makes a Business “High-Risk”

In 2011, the Federal Deposit Insurance Corporation (FDIC) classified gun selling as a “high risk activity,” along with 30 other industries.

In 2012, the Justice Department adopted the FDIC’s “high risk” list into official guidance it provides to banks under Operation Choke Point. Both the Justice Department and the FDIC have failed to explain why firearms and ammunition sellers were included on a list of “high risk” activities.

Neither agency responded to The Daily Signal’s request for comment regarding the inclusion of these industries.

Last year after coming under scrutiny by Republicans in Congress, the FDIC told banks that it had removed the list of “high risk” activities from the agency’s website, stating it had “led to misunderstandings.”

By removing the list, government officials intended to satisfy critics of the program.

But after speaking with firearms sellers and industry insiders at the nation’s largest gun show in Las Vegas, it appears that little—if anything—has changed.