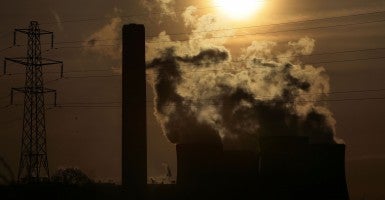 Recently the Environmental Protection Agency (EPA) announced major new regulations on the emissions of methane into the air from oil and gas production. It calls methane a “potent” pollutant and its new rules would require a 45 percent reduction by 2025 from 2012 levels. Most Americans support these new rules, according to polling from environmental groups. This isn’t surprising. Methane sounds like a dirty and dangerous pollutant and even deadly if leaked into water or the air.

However, methane is just another term for the main component of natural gas. Drillers have a powerful motive to stop leakage on their own, because they want to sell it, not spill it.

How much of a menace is methane from the oil and gas industry? The amount of leakage into the atmosphere is minuscule, says Dan Kish of the Energy Research Institute. “Cows emit more methane when they pass gas than the natural gas industry,” he notes. Look for the EPA to start regulating cattle.

Green groups such as the Environmental Defense Fund warn that emissions will increase through 2018 and have been claiming that drillers spew more methane into the atmosphere than ever before, that it is “84 times more potent” a pollutant than carbon dioxide, and new regulations are overdue.

Actually, these claims are blatantly false. Not only is methane nontoxic (propaganda notwithstanding), but methane emissions are way down over the last seven years without these new regulations. Furthermore, the reductions correspond with a major increase in oil and gas drilling and increased use of fracking technologies.

The EPA’s own data confirm this. From 2005 to 2012, methane emissions from natural gas systems have fallen by 15 percent while natural gas marketed production from drilling is up by more than 33 percent. (See chart.)

An analysis of EPA data from the energy analytic group Energy In Depth found that in virtually all of the major drilling locations, including the Marcellus Shale and the Permian Basin, emissions continued to fall in 2013, the last year for which solid data is available.

Let me say that again: More fracking has meant lower methane emissions. The methane alarm is a false alarm. So why is the methane scare so elevated now by Big Green? One reason might be that almost all of the major air pollutants have declined markedly over the last several decades, so environmental groups need to invent new scare tactics to fill up their coffers.

The emissions of lead, sulfur and smog have all fallen by at least half since 1970. The air in major American cities such as Pittsburgh, Los Angeles and Chicago are as clean as they’ve been in many decades. Big Green is running out of things to complain about.

I pointed out this inconvenient truth in recent testimony in one of Sen. Barbara Boxer’s last hearings as chairman of the Senate Committee on Environment and Public Works. I noted that, “The green protesters have it all wrong on fracking and horizontal drilling. These technologies greatly reduce greenhouse gas emissions and make climate change, less, not more probable in the future.” Especially if one considers reducing greenhouse gas emissions a worthy goal, these new regulations are off-base. Still, the liberals on the panel changed the subject to methane emissions — the new bogeyman.

The hidden agenda here is to restrict shale oil and gas drilling, and fracking. This anti-fracking obsession is strange because even EPA Administrator Gina McCarthy acknowledged that natural gas is a clean substitute for coal and thus lowers greenhouse gases. The Obama administration’s regulatory assault on methane natural gas — at a time when the industry is already struggling with thin profit margins due to the collapse in the global petroleum price — will harm the environment, not save it.

The shale oil and gas revolution imperils the renewable energy industry. Over the last seven years, the price for natural gas has fallen to $4 per thousand cubic feet, down from $12 only a few years ago. Electric cars, solar paneling on rooftops, and windmills have taken a pounding as oil and gas prices have plummeted. Spending $75,000 for a Tesla may have made sense when the price of gas was nearly $4 a gallon, but at close to $2 a gallon in many markets, all of the alternative fads are financially gone with the wind.

The only way that liberal financier Tom Steyer of California can possibly prevent green energy projects from going the way of Solyndra is by pumping back up the price of gas at the pump. The new methane regulations, which may force oil and gas producers to purchase methane credits, are designed to achieve that goal.

Meanwhile, domestic drillers in Texas, Alaska and North Dakota are already starting to lay off workers as the world price of oil falls. The methane regulations — under the guise of averting climate change rather than addressing any direct adverse health effects — will be imposed on these American producers, but not OPEC, Iran or Russia. It’s a policy that empowers our enemies abroad, costs Americans jobs, raises gas prices, and has almost no impact on the quality of the air we breathe. The White House actions remind me of the classic line by Harry in “Dumb and Dumber”: “Just when I thought you couldn’t possibly be any dumber, you go and do something like this.”