Is $5 a Gallon Gas on Its Way? This Expert Thinks So 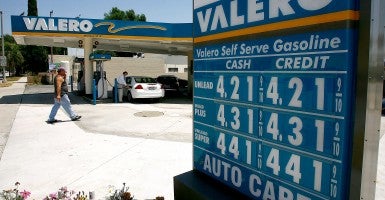 A driver fills up at a Valero gas station in 2008 when the price of a gallon of gas could reach more than $4.50. (Photo: David McNew/Getty Images)

You might want to consider filling up your tanks, America. One expert is warning $5 per gallon gas is on its way.

John Hofmeister, the former president of Shell Oil, warns that we should “[e]njoy the price, because it’s going to go back up.”

“The next round of high prices is likely to start later this year, as crude rebounds to the $80s and $90s, perhaps pushing to the $100 level by late in the year or early next,” Hofmeister told USA Today.

Prices per barrel as high as Hofmeister projects would mean a significant hike in the price you pay at the pump.

Hofmeister said that skyrocketing gas prices and even gas shortages are possible.

“Over the next several years, as demand growth approaches 100 million barrels a day and the industry production falls short, yes, I believe later this decade we’ll see $5 a gallon and possible shortages of fuel in some parts of the world,” he told USA Today.

The U.S. Energy Information Administration projects that the average price of a gallon of gas in 2015 will be $2.33.

Hofmeister is now the founder and chief executive of Citizens for Affordable Energy, a nonprofit that “promotes sound U.S. energy security solutions for the nation, including a range of affordable energy supplies, efficiency improvements, essential infrastructure, sustainable environmental policies and public education on energy issues.”

He believes that the solution to fluctuating oil prices is utilizing natural gas.

“I believe that with the right focus and development of the natural gas fuels market, we could begin to reduce global demand for oil from the 100-million-barrels-a-day level around 2020 to lower demand levels by substituting natural gas fuels,” he told USA Today. “We could pull it back to 90, 80, even 70 million barrels a day over the next two to three decades, taking enormous pressure off chronic high oil prices.”