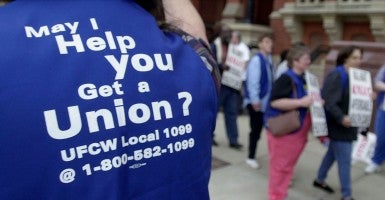 New information from the federal government suggests workers’ interest in unions continues to fall, with union membership reaching its lowest rate in 100 years.

According to data released by the Bureau of Labor Statistics today, the union membership rate fell to 11.1 percent, with just 14.6 million wage and salaried workers maintaining membership.

The rate of union membership has been on a steady decline over the past three decades. It grew slightly from 12.1 percent in 2007 to 12.4 percent in 2008. During President Obama’s first year in office, however, it fell once more.

Richard Trumka, president of the AFL-CIO, said in a statement today that though there has been job growth over the past 58 months, many of the jobs created do not provide fair wages.

“A strong recovery must be built on family-sustaining, not poverty-level jobs,” he said. “Today’s news confirms what most of us already knew: workers are finding good union jobs despite political ideologues—and jobs are coming back as the economy slowly rebounds, but neither are nearly enough.”

>>> Fact Checking Obama’s Jobs Claims in State of the Union

According to the Bureau of Labor Statistics, the rate of union membership for public-sector workers last year was 35.7 percent, compared to just 6.6 percent for the private sector.

Of those working in the public sector, government had the highest union membership rate.

James Sherk, a labor economics policy economist at The Heritage Foundation, told The Daily Signal that the drop in the rate of union membership can likely be attributed to the antiquated union model.

“They’re selling a product that hasn’t changed that much since the 1930s when America’s labor laws were founded,” he said. “Today’s workers simply aren’t that interested in purchasing what unions have to sell.”

Sherk said that unions have failed to modernize over time and noted that workers are moving away from joining because their contracts are no longer relevant.

“Today’s release of the annual union membership numbers by the Bureau of Labor Statistics shows that in this economic recovery, people are either seeking out good union jobs or taking matters into their own hands by forming unions to raise wages and ensure that new jobs are good jobs,” he said in his statement.