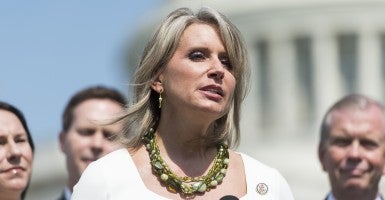 House Republican leadership tonight abruptly dropped a bill that would ban elective abortions after the 20th week of pregnancy.

According to news reports, female GOP lawmakers raised concerns on the Pain-Capable Unborn Child Protection Act, prompting party leaders to scrap a vote on the bill.

Prominent Republican members who rallied against the plan to limit late-term abortions include Reps. Charlie Dent of Pennsylvania, Renee Ellmers of North Carolina and Jackie Walorski of Indiana.

“I prefer that we avoid these very contentious social issues,” Dent told National Journal. “Week one, we had a speaker election that did not go as well as a lot of us would have liked. Week two, we got into a big fight over deporting children, something that a lot of us didn’t want to have a discussion about. Week three, we are now talking about rape and incest and reportable rapes and incest for minors. … I just can’t wait for week four.”

The House had been expected to vote on the bill Thursday, timed to coincide with the annual March for Life, a rally for pro-life advocates in Washington, D.C., to mark the anniversary of the Supreme Court’s 1973 Roe v. Wade decision that legalized abortion.

President Obama had vowed to veto the bill.

The House will vote instead Thursday on a bill prohibiting federal funding for abortions, a less ambitious measure that the chamber has already passed before.

Conservative commentators and pro-life advocates expressed frustration with the last-second decision to change course. Some said that those opposed to the original bill were ceding to politics over policy.

pro-abortion pundits are having a field day. huge unforced error on issue that had 60% approval. #MarchforLife2015

According to a November Quinnipiac poll, 60 percent of Americans back banning abortion, except in cases of rape or incest reported to the authorities, after 20 weeks.

During a debate on the issue today, Rep. Trent Franks, R-Ariz., who led the effort to pass the Pain-Capable Unborn Child Protection Act, called late-term abortion “the greatest human rights atrocity in the United States today.”

Supporters of the right to abortion, and critics of Republicans’ moves to act on the issue so quickly after earning a majority in Congress, say lawmakers should be more focused on creating jobs than on passing “anti-choice” bills.

“Instead of a jobs agenda, the majority seems bound and determined to attack women’s rights, to take away a woman’s constitutional right to make for herself the most private and personal and intimate decisions,” said Rep. Carolyn Maloney, D-N.Y., speaking on the House floor today against the Pain-Capable Unborn Child Protection Act.

At least for a day, the Republican majority recanted on that effort.

UPDATE: In comments to reporters Thursday, Ellmers, who is credited for starting the rebellion, said it was “unfortunate” how the situation played out. She also stood by her decision. “When we come off as harsh and judgmental, we stop that conversation and we’ve got to learn to be doing a better job,” she said, according to the Washington Examiner.