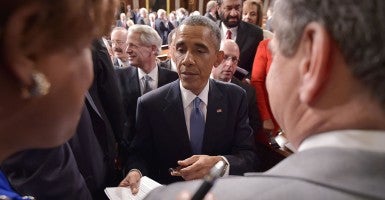 MSNBC was the soundtrack to this party.

There were Ready for Warren stickers and exasperations of “Oh, Boehner” whenever the Republican speaker of the House crinkled his face or held his applause.

There were chants of “Amen” to President Obama’s complaints about high child care and college tuition costs.

There was applause to presidential promises to open the Internet and pursue normalized relations with Cuba.

Camera pans to Sen. Chuck Schumer, D-N.Y., earned shouts of “Shuma” and a shot of Vice President Joe Biden blowing a kiss to his wife triggered a “so cute.”

They pumped their fists and rose drinks to the sky when Obama vowed to veto legislation that would derail his policies.

Most of all, the State of the Union watch party hosted by the progressive group Network4Progress carried an unmistakable sense of optimism seven years after Obama’s message of hope and change shook up the political landscape.

Obama’s State of the Union speech Tuesday night—full of more calls to act alone if Congress gets in the way of his agenda—only emboldened supporters smitten from the president’s recent actions on immigration, Cuba and climate change.

“This was Obama’s I don’t give a f*** speech,” said Eduardo Rodriguez, a 34-year-old government employee who attended the watch party at Local 16, a hip restaurant in Washington D.C. “He has nothing to lose. There is nothing holding him back.”

Though change under Obama’s watch isn’t as bold as some expected, there’s “say no” Republicans in Congress to blame for that, partygoers said. Obama’s offensive moves coupled with positive trends in the economy inspired Patrick Sullivan, a 24-year-old from Potomac, Md., to declare the country “much better off” under the president’s watch.

But Sullivan believes Obama’s legacy would be even stronger if not for partisan politics.

“The country is a better place than it was two years ago and much better than when Obama took office,” said Sullivan, who interns for the Commission on Security and Cooperation in Europe.

“All economic numbers are on the upswing. At the same time, there are more lower paying service jobs, and I would like to see more jobs in professional work. So overall, Obama is a decent president. I blame House Republicans, specifically the tea party for not letting Obama advance his agenda. But Obama also set an aggressive bar, shoving Obamacare down people’s throats. So it’s a little of both.”

Lorenzo Bruscagli, a 27-year-old from Washington, D.C., who also works at the Commission on Security and Cooperation in Europe, bemoans partisan politics.

“Partisanship is good for your cardio and keeps the blood pumping, but it’s depressing,” Bruscagli said.

But with that said, Bruscagli wishes Obama had acted sooner on his agenda rather than ceding to “political etiquette.”

“I wish Obama had [acted alone] at the start,” Bruscagli said. “It’s too late now. It’s easy to be aggressive when it won’t play out in another election cycle. He didn’t capitalize on the goodwill he came in with. He wasted a lot of political capital. But I have no choice but to be optimistic.”

And his strategy to confront the reality of losing control of the Senate to Republicans is clearly by design, playing well on followers who were ready to turn on him.

Before Obama’s delivered the State of the Union, Raul Alvillar, the Democratic National Committee political director—with party attendees huddled around him—vowed that Democrats would continue ambitious outreach efforts in the face of failure. “We didn’t have the best midterm elections,” Alvillar said. “But this is not an autopsy. We wrote the book on how to organize people. We know what the hell we’re doing. We made mistakes. But we won’t burn the book. We will take a red pen and cross off what didn’t work. We can’t do the s*** we do without you.”

“We wrote the book on how to organize people,” says Raul Alvillar of @TheDemocrats.

Jim McBride, the founder of Network4Progress, urged Democrats to use Twitter to lobby the White House and Republicans on “issues you care about.”

Judging by cheers at the watch party for the president’s proposals of free community college, enhanced sick and maternal leave benefits and tax hikes for the wealthy to pay for middle class savings, his supporters appreciate—and expect—a voice as Obama charts his legacy.

“I am very happy with the president and excited to see what the end of his presidency will be like,” said Emile Aries, a 27-year-old female resident of the nation’s capital who used to work for the Obama campaign.

“He already has such a legacy with health care reform, whether we appreciate it now or later. I’m interested to see how people remember him. I am still full of hope.”