What You Need to Know About Joni Ernst, the Iowa Senator Giving the Republican Response to the State of the Union 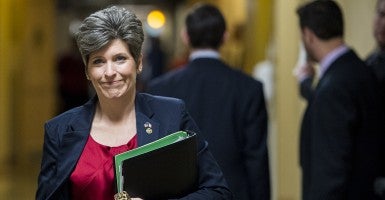 Joni Ernst, a freshman senator from Iowa who took office just two weeks ago, will have the task of responding to President Obama’s State of the Union tonight.

Truly honored to announce that I will be delivering the #GOPAddress to the country following the President's #SOTU. Tune in Tuesday, 1/20.

Ernst, who defeated Democrat Bruce Braley in November, is a lieutenant colonel and has served 21 years between the Army Reserve and National Guard. In 2002-03, she spent 14 months in Kuwait as part of Operation Iraqi Freedom.

She got her start in politics as the Montgomery County auditor in 2004. After two terms, she was elected to the Iowa Senate in a special election in 2011.

Ernst is a pig farmer and made it part of her campaign.

She even made a video about castration in a political ad called “Squeal.”

Her selection for the Republican response was greeted with tweets like this from NBC News’ Luke Russert:

Joni Ernst’s meteoric rise continues. This time last year she was an unknown pig farmer, on Tues she will deliver GOP SOTU response.

Like her Republican predecessors—some of whom have endured more criticism than praise for their response to Obama—Ernst will have her 10 minutes of fame tonight.