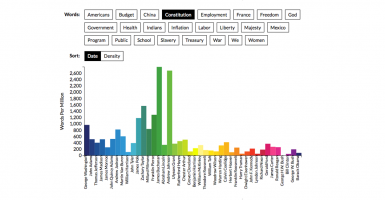 This interactive chart by The Atlantic breaks down the way words have been used over the history of different presidents.

The U.S. Constitution requires that every president “from time to time” shall present Congress with his thoughts regarding the “State of the Union.”

Obama has used the word “freedom” in his State of the Union addresses less often than any president since Warren Harding.

On Jan. 8, 1790, in Federal Hall in New York City, President George Washington concluded the first State of the Union address by thanking listeners for their consideration of that “which it is my duty to afford.”

After Washington and President John Adams, their successors chose to send written remarks to Congress until President Woodrow Wilson decided to address Congress in person.

Whether written or spoken, the State of the Union address provides Americans and their representatives in Congress with an opportunity to learn about the president’s political philosophy and policy goals.

Researchers have studied these pivotal moments in American history to show you the words at the forefront of each president’s mind.

Utilizing the Bookworm platform for text analysis, The Atlantic combed through 224 State of the Union addresses to analyze the words each president used.

This interactive chart is the result.

According to their research:

This tool also shows “the most statistically distinct words” between two presidents.