Americans Deserve a Fair Shot. Government Should Get Out of the Way. 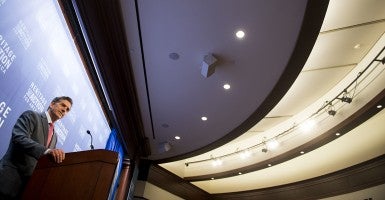 Growing up, most Americans are taught to treat everyone fairly and recognize the importance of equality under the law. Despite political disagreements and the headache of elections and campaigns, we learn that a free society plays no favorites.

Most of us still believe in that. Unfortunately, many in Washington, D.C., don’t.

You can see it in the way the federal government treats businesses, from Wall Street to internet search engines. Politicians rail against corporations and vow to protect taxpayers, investors, and users with tough new regulations. They need help crafting legislation, so they turn to the big players – whether they’re banks, tech companies or manufacturers – and ask for expert advice.

The big dogs jump at the chance to rig the system against competitors who can’t afford to compete under the new regulatory regime, and presto! The government is out picking winners and losers in the marketplace, even worse than before. We call it “cronyism,” and Washington is the Crony Capital.

It comes from the idea that Washington should fix everyone’s problems instead of freeing them to solve their own. This error manifests itself in many ways.

You can see it in an education system that puts demands of union bosses in front of the needs of our children. You can see it in the actions of politicians doing anything they can to stop education savings accounts, charter schools and other school choice initiatives.

You can see it in a health care system that forces some people into certain programs and shoves some out, while limiting options – all promoted by big insurance companies when Obamacare was being pushed through Congress.

You can see it in big tax breaks received by interests large enough to pay for lobbyists – but missed by the small business that couldn’t possibly hire their own.

They shouldn’t have to. Two senators and a congressman can be sufficient representation for both a telecom wizard in Silicon Valley and a soccer mom in Indianapolis, if we return to constitutional government.

Fortunately, more than a few senators and representatives agree. They recently gathered on Capitol Hill for a Conservative Policy Summit, hosted by Heritage Action for America. It was inspiring to see so many like-minded legislators get together and work out ways to open up the American dream to everyone.

We discussed the EXPAND Act, which encourages a modern, “all of the above” approach to energy production that would help replace the maze of tax exemptions and carve-outs for special interests with lower rates across the board for all energy producers. We also looked at the CHOICE Act, which gives states leeway to set aside more money for student scholarships and gives parents more control over saving for education. And the “too big to fail” crowd better beware: the PATH Act protects taxpayers, opens up competition in the housing market and ends the bailout-fueled interference of Fannie Mae and Freddie Mac.

These are just a few of the initiatives we want to put on President Barack Obama’s desk this year. They all have one big thing in common: they end special treatment for certain well-connected people and businesses and lobbies, and give everyone a chance. Our rallying cry of the day: “Opportunity for all, and favoritism to none.” This makes sense to many Americans, but the “cronies” will fight it tooth and nail.

This isn’t just a conservative idea. It doesn’t matter who you voted for in the last election, and it doesn’t matter what party you’re in. There are some things we can all agree on: creating more jobs, lowering the cost of living, ensuring every student gets a good education, and putting a barrier between the government and favored special interests.

All of us deserve the opportunity to grow and succeed. Americans don’t usually ask for special treatment; we’re happy with a fair shot. If we can get Washington out of the way, and return more dollars and decisions to families and communities, that’s a fine start.