How Obamacare Exchanges Have Decreased Competition Among Insurers 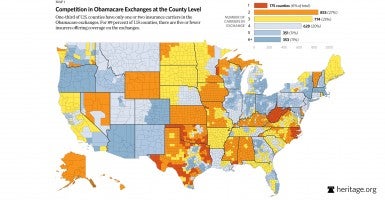 Source: Data compiled by the author, Alye Senger. Data for 37 federally facilitated or federally supported exchanges are from the U.S. Department of Health and Human Services, “2015 Health Plan Information for Individuals and Families,” https://www.healthcare.gov/health-plan-information-2015/ (accessed December, 4, 2014). Data for 13 state-based exchanges are from either the state’s exchange website or its insurance department. Information regarding insurer participation in Hawaii was unavailable and assumed to be the same as the previous year, 2014. All data are presented at the parent company level. See Appendix Table 3 for county-by-county figures.

Unsurprisingly, Obamacare has made yet another problem worse—creating a government exchange that is less competitive than the prior individual market.

In 2009, when President Obama was trying to sell his health care reform ideas to Congress, he promised a competitive marketplace, where costs would decrease and quality would increase. He said:

We’ll…[create] a new insurance exchange — a marketplace where individuals and small businesses will be able to shop for health insurance at competitive prices.  Insurance companies will have an incentive to participate in this exchange because it lets them compete for millions of new customers.  As one big group, these customers will have greater leverage to bargain with the insurance companies for better prices and quality coverage.

But thus far, much like his other promises, this one falls flat on all fronts.

When compared to 2014, 2015 is an improvement, but the exchanges still remain less competitive than prior to Obamacare.

In 2015, consumers in one-third of the 3,134 counties in the United States face an exchange market that is either an insurer monopoly or duopoly.

2015 county-level competition. Though state-level insurer participation is a good measure of competition, it isn’t necessarily a reflection of the choice consumers have. For instance, there are 14 different insurers selling policies on the Texas exchange, but no Texas county has more than nine carriers offering coverage and 62 percent of the state’s counties have only one or two insurers offering coverage in the exchange in 2015. Thus, a more accurate measure of choice is at the county level since health insurance is offered and priced on a local basis.

In 2015, consumers in one-third of the 3,134 counties in the United States face an exchange market that is either an insurer monopoly or duopoly. This means that residents in these counties have only one or two insurers from which to choose. In 58 percent of total U.S. counties there are three or fewer insurers participating on the exchanges.

When compared with 2014 insurer participation, county-level competition has improved in some instances for 2015, but choice is still very limited for a significant share of the country. A lack of insurer competition combined with Obamacare’s standardization of benefits means consumers in Obamacare’s exchanges will have very little choice.

To see how competition and choice fare in your state and county, read the full analysis.