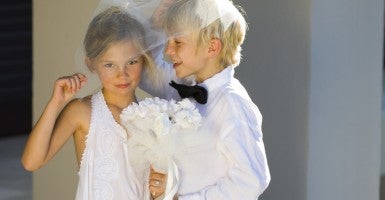 One treaty would allow toddlers the right to assemble with whomever they want. (Photo: Getty Images)

Those nasty Republicans are at it again.

Dennis Jett, former U.S. ambassador to Mozambique and Peru, writes in The New Republic that GOP senators are blocking “even the most reasonable international treaties.” As opposed, apparently, to that mythical entity, the domestic treaty.

Jett is outraged that there are “36 treaties awaiting action by the Senate,” and implies that the ATT is one of them. He even helpfully links to a list of pending treaties. But the ATT’s not on it. That’s because the administration hasn’t sent the treaty to the Senate for ratification.

Jett’s also angry that another treaty — the Convention on the Rights of the Child (CRC) — is supposedly stalled in the Senate. But it’s not. Though President Clinton signed the CRC in 1995, no administration — Democrat or Republican — has submitted it. That’s why the CRC wasn’t included on the Obama administration’s 2009 Treaty Priority List, at a time when Democrats were only seven votes away from the two-thirds majority needed to ratify it.

Today, both treaties would certainly face a rough ride in the Senate. But it’s not Republicans who are preventing the Senate from considering them. Rather, they’re being blocked by an administration that hasn’t thought it wise to send them to the chamber.

Jett’s blatant factual errors (and political bias) are astounding. It reminds me of 2011, when the administration blamed Republicans for stalling three trade deals, only for ABC’s Devin Dwyer to point out that the White House hadn’t actually submitted the treaties in the first place.

For that matter, has Jett read the CRC? He offers the usual encomiums to his “reasonable” treaties. But here, for example, is part one of Article 15 of the CRC, in its entirety:

So if a mother forbids her child to play with a bully or join a gang, she’s breaking the treaty. Three-year-olds apparently have the “freedom of peaceful assembly.” This is crazy stuff. And remember: Unlike many nations, after the U.S. fully ratifies a treaty, it becomes our law, and is enforceable through our courts. We take treaties very seriously, and we’re right to do so. That’s why we don’t ratify every single one that comes along.

Jett calls the CRC “one of the most popular and respected human rights treaties in history.” True, lots of nations have signed it. But it’s likely the least respected, if by “respected” you mean “obeyed.”

One example of the disregard shown for the CRC by its signatories comes from Saudi Arabia, where the Grand Mufti announced last month that there’s nothing wrong with girls below the age of 15 getting married. But even Swedish mothers don’t allow their kids full freedom of association.

If the treaties Jett champions are so effective, why do the ills at which they’re aimed still exist? Why hasn’t the South China Sea dispute been settled by the Law of the Sea Treaty? Why do so few of the nations that applaud the ATT have effective export controls on weapons? Is The Economist wrong when it says that the U.S.’s international crackdown on tax evasion through the Foreign Account Tax Compliance Act (FATCA) is “doing more harm than good”? Are there therefore no legitimate concerns at all about U.S. tax treaties?

Many of these “reasonable” treaties are merely aspirational fantasies. Jett’s right to say that globalization makes cooperation between nations vital. Indeed, treaties are how civilized people do business. But many of these treaties aren’t about cooperation or doing business; they’re simply one-sided promises that are (supposedly) binding on signatories like the U.S., regardless of whether the other nations involved live up to their pledges.

That’s why these treaties don’t work. Precisely because they don’t involve any actual cooperation, they don’t give bad regimes any incentive to change their behavior. The fact that many nations have ratified these treaties isn’t evidence of their effectiveness. On the contrary, it’s a demonstration of their ineffectiveness: Because in practice they apply only to law-abiding nations, signing them is an easy way for autocratic governments to win applause from people like Jett.

The U.S. has been, and continues to be, a prolific negotiator, signer, and ratifier of treaties. The fact that 36 of them are pending in the Senate leads Jett to conclude that something is dangerously amiss. It leads me to an entirely different conclusion: There are a few treaties that are genuinely controversial, and many hundreds that are not. Most of these controversial treaties date from the 1990s, when it became fashionable to spin them from fairy dust.

These treaties illustrate the decay of the international system, because they aren’t serious, verifiable commitments between nations. And just so you know, ambassador — the question isn’t whether a treaty damages U.S. sovereignty by limiting what we can do; it’s whether the American people define those limits through a constitutional system, and whether they are genuinely binding on all parties, not just the U.S.

To return to the ATT, let’s make the case against it simple by ignoring, for now, the Second Amendment — ignore the fact that many of the people and institutions closely involved in the treaty support international restrictions on domestic firearms ownership, Amnesty International’s implication that a “perfect” treaty would cover “domestic internal gun sales,” the ill-informed scholars who describe the current text as an “arms control treaty,” and the U.N. experts calling for it to forbid “selling weapons to non-State entities,” which would include American gun owners.

That’s why I oppose the ATT: Its supporters avowedly seek to use the treaty to limit the ability of all administrations to arm opponents of tyrannical regimes and nations under attack by genocidal terrorists. And I don’t think that’s reasonable.