What the Media Missed About Obama’s New Proposal: It’s a Wage Cut for Workers 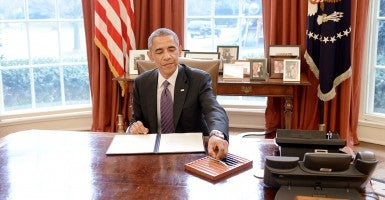 President Obama just urged Congress to cut workers’ wages. Of course, the news headlines did not report it as such. However, make no mistake: The president’s call for mandatory paid sick leave would simultaneously cut workers’ pay.

The president proposes requiring businesses to offer seven days paid sick leave to their workers. That sounds great. But the president never explained where businesses will get the money for it. In fact, the cost almost certainly will come out of workers’ paychecks.

Businesses care about the total compensation they pay workers. They care much less about how that compensation splits between wages and benefits. Economists have repeatedly found that when the government requires businesses to offer a benefit, they do so – and take the cost out of workers’ pay.

Ironically, some of the best research on this comes from Jonathan Gruber, the Obamacare architect who boasted that the healthcare law takes advantage of Americans’ “stupidity.” Gruber’s research finds that mandated increases in medical benefits and mandatory workers compensation insurance lead to offsetting reductions in cash wages.

The popularity of Obama’s paid sick leave proposal depends on workers not realizing it ultimately comes out of their paychecks. If the president’s proposal becomes law, many workers will lose the equivalent of seven days of pay a year.

The government should let employees and businesses decide for themselves how to divide compensation between wages and paid leave. Of course, most workers do want paid sick leave. Currently 91 percent of businesses already provide some form of it.

Workers should be the ones who decide whether to work at a firm that offers lower wages and more fringe benefits, or vice versa. The government should not make that decision for them. Some workers value paid sick leave. Some have tight budgets and would prefer higher wages instead. Individuals understand their own needs much better than the government does.