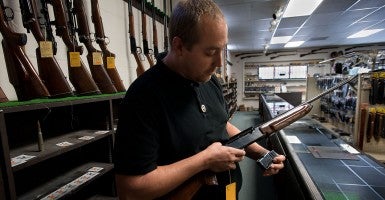 Another gun seller says his firearms business was forced to shut down its bank account as a result of the government’s secretive initiative known as Operation Choke Point.

This time, he’s offering audio recordings to prove it.

Mike Schuetz is a former state employee who worked as a probation and parole officer for eight years in Hawkins, Wis.

After working for the state, he told Breitbart News that he decided to open a private investigation business and operate a gun store on the side.

His store, Hawkins Guns LLC, sells both firearms and ammunition.

To manage his finances, Schuetz set up a business account with Heritage Credit Union located in Hawkins.

On Nov. 13, 2014, Hawkins Guns LLC posted this message on its Facebook page about the credit union’s decision to close its business account:

In an audio recording released by Schuetz, a Heritage Credit Union bank teller told him: “We have to answer to the examiners. Whoever they are.”

Schuetz wasn’t satisfied with that response and asked to speak with a manager about why the bank was closing an account for a legal and legitimate business.

A regional manager explained to Schuetz that federal examiners came into Heritage Credit Union to perform “an exam on everything.”

Schuetz recorded a series of conversations and phone calls between himself and employees at Heritage Credit Union. The U.S. Consumer Coalition posted audio of those recordings.

The U.S. Consumer Coalition has helped expose Operation Choke Point and its impact on businesses across America. The story sparked a segment on Fox News’ “Special Report” this evening.

In the audio recordings, a regional manager is heard citing regulations handed down from the National Credit Union Administration, which regulates, charters and supervises more than 95 million account holders in federal and state-chartered credit unions.

“Examiners from NCUA [the National Credit Union Administration] came in and looked at our accounts … looked at our books. Here’s some accounts that we feel that we’re going to regulate you on … and kinda put the screws to us as far as what we could and couldn’t do. The regulatory and compliance issues that we said earlier are true. We never used to have to do that stuff.”

The National Credit Union Administration, an independent federal agency that touts on its website that it has “the backing of the full faith and credit of the U.S. government,” told The Daily Signal that the case has nothing to do with Operation Choke Point. A spokesman sent this statement:

NCUA cannot comment on specifics of any matter involving credit union supervision. NCUA does not have a policy specific to any business, nor do we instruct a credit union about what individuals or businesses it can serve. The decision to open, close or decline an individual or business account generally lies with the credit union.

As the provider of insurance coverage for the accounts of nearly 100 million members in 6,500 credit unions, NCUA requires all those credit unions to evaluate risks posed by accounts and maintain the necessary capacity to effectively manage those risks.

Heritage Credit Union is chartered by the state of Wisconsin, which is its primary regulator.

According to Breitbart, Heritage Credit Union eventually told Schuetz the bank is trying to “fix” the situation and open an account for his firearms business. But having already found another bank that won’t discriminate against gun sellers, Schuetz has no interest in going back.