Should You Be Jailed for Committing a Crime You Didn’t Know Was a Crime? New Ohio Law Tackles Issue. 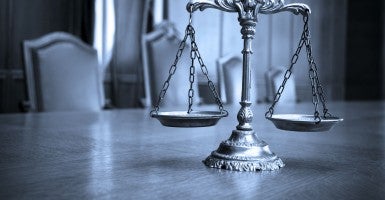 Ohio recently enacted a new law to reform the way criminal statutes are written and interpreted in that state. That measure is a step in the right direction toward remedying the problem of overcriminalization.

Senate Bill 361, sponsored by Sen. Bill Seitz, R-Cincinnati, passed with the overwhelming support of the Ohio General Assembly and was signed into law by Republican Gov. John Kasich. The law requires the legislature to specify the degree of mental culpability in every future criminal statute and clarifies the default mental state that defendants must possess for criminal statutes where none is expressed.

To understand why this change matters, consider this scenario: Two customers exit a restaurant on a winter day and on their way out grab a coat hanging in the lobby. The first customer accidently takes a coat belonging to someone else thinking it was his and carries it out of the store. The second customer likewise grabs the wrong coat but takes it because he decides it looks better than the one he owned.

Both actions were identical, but only one customer should be, and likely would be, charged with committing a crime. This is because courts recognize there is a difference between carelessly picking up the wrong coat from a restaurant and intentionally stealing one off the rack. The first action is not a crime, but merely a mistake, while the latter is considered larceny. The action is the same in each example, but what criminal laws seek to prohibit is a person engaging in this sort of behavior with a guilty mind.

In legal terms, this is referred to as mens rea, which is the culpable mental state of the defendant. Criminal statutes have historically required proof of mens rea in order to secure a conviction. There are different levels of mens rea (often referred to as criminal intent): a person can act negligently, recklessly, knowingly, intentionally or willfully, and the law prescribes different punishments for each level of these mental states. As Justice Oliver Wendell Holmes once remarked, “Even a dog distinguishes between being stumbled over and being kicked.”

But while inclusion of mens rea in criminal statutes has long been recognized by the courts, earlier versions of Ohio’s law did not sufficiently require such a provision. In his testimony before the Criminal Justice Committee of the Ohio Senate, Robert Alt, president of the Ohio-based Buckeye Institute for Public Policy Solutions, cited a report that was produced by the Heritage Foundation and the National Association of Criminal Defense Lawyers which illustrated the lack of mens rea requirements in many criminal statutes. He stated that “of the 446 non-violent criminal offenses introduced in the 109th Congress, more than half (57 percent) lacked an adequate mens rea requirement,” and for those offenses that were ultimately enacted, “64 percent contained inadequate mens rea requirements.”

Perhaps even more troubling were older versions of Ohio law that attempted to specify the default mental state for criminal statutes where no mental state was provided. R.C. 2901.21(B) stated in pertinent part:

An Ohio court interpreted this law, however, to mean that if a criminal statute contained a requirement of mens rea for one section of a crime but not another, it should be presumed that the legislature intended the latter section to be a strict liability offense, that is, an offense whereby someone can be convicted by simply committing the act that constituted the crime under the statute even if he did so without any knowledge of the law’s existence or without any intent to violate the law or cause harm. This reading essentially erred on the side of strict liability for every criminal statute that was silent on the matter (not a requirement that the prosecutor prove recklessness on the part of the accused, as the statute seemingly provided).

As Vikrant P. Reddy of the Texas Public Policy Foundation noted, members of an Ohio family encountered the dangers of inadequate mens rea after being charged with violating a law, even though they had no intention to commit a crime. In 2008, the Stowers’ family home was raided by the Ohio Department of Agriculture and Lorain County Health Department for operating a retail food establishment without a license, a regulatory offense that does not involve obvious injury to the person or property of anyone. The Stowers did not know they needed to obtain a license and believed they were operating within the bounds of the law. No criminal penalty was enforced in this instance, but the family could have faced jail time for a mistake of law.

Because of cases such as this one, several public policy organizations urged the Ohio legislature to make significant reforms to the criminal justice system. The Ohio Prosecuting Attorneys Association, the Ohio Judicial Conference, the Buckeye Institute, the Manhattan Institute and the Texas Public Policy Foundation all endorsed the bill.

The new law has three key components. First, it requires lawmakers to include a mens rea provision for every future criminal statute. A failure to do so, under the new law, would render that future criminal statute void.  This would not preclude the legislature from enacting a strict liability offense but would force the legislature to clearly express its intention to do so.

Second, the new law clearly corrects the judicial misinterpretation discussed above by providing that:

Third, when a future criminal statute contains an element of that offense related to knowledge or intent (“or to which mens rea could fairly be applied”) but fails to specify a degree of culpability (“nor plainly indicates a purpose to impose strict liability”), then it shall be presumed that the default standard is one of recklessness, meaning that a prosecutor must prove that the accused acted recklessly, at the very least, before the accused can be convicted of the crime set forth in that statute.

While we might have preferred a higher standard of culpability, requiring the government to prove that a person acted recklessly in violating a statute, rather than convicting someone based solely on a theory of strict liability, is a significant achievement and provides some measure of protection to innocent parties who simply made an honest and reasonable mistake about a law. As Justice Robert Jackson famously stated in Morissette v. United States:

The contention that an injury can amount to a crime only when inflicted by intention is no provincial or transient notion.  It is as universal and persistent in mature systems of law as belief in freedom of the human will and a consequent ability and duty of the normal individual to choose between good and evil.

Ohio’s new reform is an important step forward to deal with the proliferation of laws which lack adequate mens rea provisions and unfairly criminalize ordinary behavior that an average citizen would not consider blameworthy and, hence, might not even recognize was wrong, much less a crime.

Here’s hoping other states will take similar steps to restore faith in the justice system.