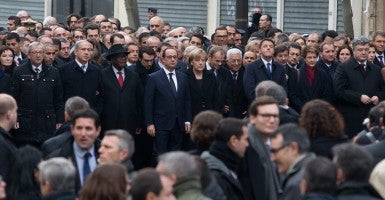 UPDATE: The Obama administration admitted this afternoon that it erred in not sending a more prominent official to the anti-terrorism march yesterday in Paris. During a press briefing, White House Press Secretary Josh Earnest said:

The Obama administration was notably absent from the massive anti-terrorism unity march in Paris on Sunday.

The decision not to send any high-ranking officials to participate in the rally has spurred heated criticism against the White House.

“Clearly, no effort was made by the White House to send a top official to participate in the rally,” said Nile Gardiner, director of the Margaret Thatcher Center for Freedom at The Heritage Foundation.

Secretary of State John Kerry, who was in India for a prior commitment, called the criticisms “quibbling.” In an interview with NBC, he said:

We have offered, from the first moment, our intel, our law enforcement and all of our efforts, and I really think that, you know, this is sort of quibbling a little bit.

President Obama, Vice President Joe Biden, Secretary of State John Kerry were all absent, as were top Republicans or any 2016 possible presidential candidates.

Ambassador to France Jane Hartley did take part in the march.

The U.S. was represented by Jane Hartley, Ambassador to France, at the Paris #UnityMarch.#CharlieHebdo #JeSuisCharlie pic.twitter.com/LF8fKnvy4f

The White House did not comment on the president’s or vice president’s whereabouts. Kerry announced a trip to Paris later this week to reaffirm U.S. solidarity with its oldest ally.

U.S. Attorney General Eric Holder, who was in Paris for a conference on counterterrorism, also didn’t attend the rally. NBC News said he was taping an interview for “Meet the Press” during the event, which attracted more than 3.7 million people.

Rob Fournier, a National Journal senior political columnist, downplayed the significance of the administration’s decision. Calling Obama’s absence “a missed opportunity,” he urged the public not to “confuse a mistake with something more meaningful.”

“America doesn’t need to march its president in the streets of Paris to prove its resolve,” he wrote.

CNN’s Jake Tapper had a different take, writing, “I say this as an American—not as a journalist, not as a representative of CNN—but as an American: I was ashamed.”

Heritage’s Gardiner said America’s absence from the rally sent “all the wrong signals” to both our friends and enemies.

The leader of the free should have at least made an effort to attend. And if not, he could have sent the vice president or the secretary of state.