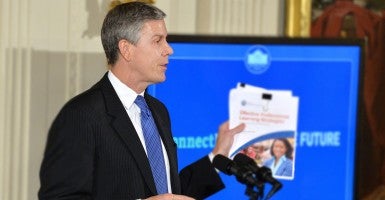 Education Secretary Arne Duncan urged a revamp of the “tired” and “prescriptive” law currently known as No Child Left Behind today, calling for a law that replaces NCLB with one that includes “more money” than is currently authorized.

Duncan urged Congress to increase spending, ensure educational “equity” and to include preschool as a component of the Elementary and Secondary Education Act.

The push to include preschool as part of Act was particularly notable. This is a dramatic departure from the earlier purpose of the ESEA—which has historically focused on K-12 education for disadvantaged students—and represents significant increased federal intervention in early childhood education.

Duncan urged a re-write of ESEA that “recognizes that no family should be denied preschool for their children.” But it’s not clear that there are many families who want to send a child to preschool and cannot. The administration also should consider that combined estimates from the National Institute for Early Education Research  and the U.S. Department of Education suggest that between two-thirds (66 percent) and three-quarters (74 percent) of 4-year-old children are already enrolled in some form of preschool program.

Many of those children (28 percent), particularly children from low-income families, are enrolled in state- and federally funded preschool programs. For its part, the federal government currently operates 45 early learning and child care programs, of which 12 have as an explicit purpose to provide early childhood education and care.

In addition to the call for an expansion of the ESEA downward into the realm of preschool, Duncan also urged an increase in spending for the programs that fall under the ESEA, including a $1 billion boost for the Title I program, which provides federal funding to low-income school districts. In all, the administration wants a $2.7 billion increase in spending on programs that are authorized by the law.

Inflation-adjusted federal per-pupil spending on education has nearly tripled since the 1970s, and there is little evidence that continually increasing spending on programs—both niche competitive grants and large formula programs like Title I—have or will lead to increases in student performance.

In the half-century that has followed the enactment of the original ESEA, graduation rates for disadvantaged students have remained flat, American students rank in the middle of the pack of their international peers, reading and math achievement has been virtually stagnant and achievement gaps persist.

Federal per-pupil spending on education has nearly tripled since the 1970s, and there is little evidence that continually increasing spending on programs will lead to increases in student performance

Although Duncan’s speech is illustrative of the White House’s priorities for the law, over the next few weeks Congress, specifically the House and Senate education committees, likely will offer their own draft re-writes. At a minimum, any potential reauthorization of NCLB should:

In the 50 years since the passage of the ESEA, currently reauthorized as No Child Left Behind, its most significant contribution has been a dramatic escalation of spending and a bureaucratic compliance burden that has made states more responsive to Washington than to local parents, teachers and taxpayers.

Fifty years later, it’s time for a serious re-examination of the nation’s largest K-12 education law, not a blind expansion of the failed status quo.