Firearms Sellers Say They’re Being Choked Off From Payment Processors 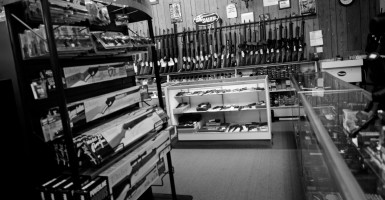 Go to a gun show, and you won’t find many merchants using PayPal.

That’s because some payment processors explicitly prohibit the use of their systems for online — and some in-store — sales of firearms, ammunition and certain accessories.

Retailers in the gun industry say they’re being discriminated against.

“Being shut out from mainstream payment processors makes us feel like we are part of some type of shady business when, in fact, there is more regulation and documentation required for federally licensed firearms dealers than most businesses,” said Trevor Blandford of Terminal Performance Associates in Caroline, Va.

Blandford, 21, has been working gun shows for his family’s business since he was 14 years old. Recently, his parents named him general manager of Terminal Performance, which is known for its custom-built pistols and rifles and originally finished wraps. He and his family sell their merchandise online and at local trade shows.

To process payments, most merchants use some sort of payment processor.

The concern some firearms sellers expressed to The Daily Signal is that restricting their access to some of the largest payment processors in the country — who offer the lowest transaction fees in the business — puts them at an unfair disadvantage to other industries.

Add that to the long list of regulations firearms sellers already face, and some say it’s not even worth attempting to start a business.

“In most of the states, especially California and New York, you’re a lunatic if you start a gun business,” Cody Wilson, co-founder of Defense Distributed told The Daily Signal.

“In most of the states, especially California and New York, you’re a lunatic if you start a gun business,” says Cody Wilson.

He was blocked from his PayPal account twice and shut out from Stripe.

Stripe is a San Francisco startup that provides an easy way for websites and mobile apps to take payments using a range of payment systems from credit cards to Apple Pay.

Wilson’s case is more murky than other gun merchants. Instead of directly selling firearms and accessories, he provides blueprints on the Internet to manufacture 3D-pistols at home. The government classifies his business as the equivalent to distributing weapons without a license. Still, Wilson claims, the roadblock against gun dealers in the industry is real and it hurts small businesses most.

Some payment processors publicly state their policy against gun sellers. Square, for example, which is famous for its tiny white credit card reader that plugs into iPhones and other cellular devices, explicitly prohibits sellers from accepting payments in connection with firearms. It wasn’t always Square’s policy to box out firearms sellers. A handful of vendors at “The Nation’s Gun Show” in Dulles, Va., told The Daily Signal on Jan. 2 that they used to enjoy the many benefits of using Square and similar payment processors.

But after Square updated its policies, merchants such as Blandford of Terminal Performance are left using what they consider second-rate payment processors.

On May 10, 2013, Terminal Performance received an email notification regarding Square’s updated seller agreement.

In it, Blandford discovered that Square added firearms to its “prohibited” seller list.

Under its “Seller Agreement,” Square publicly prohibits customers from accepting payments for the sale of firearms. (Photo: Square)

Proactively, Blandford’s family business terminated its relationship with Square because just a few years earlier, PayPal had frozen its account with money still inside.

“The inability to utilize Square and Paypal has been detrimental to our business both in monetary ways as well as inconvenience,” said Blandford.

In a statement to The Daily Signal, PayPal said the company has prohibited the use of its system for the online sale of “firearms, ammunition and certain firearm parts and accessories” since 2003. It does, however, allow “certain” merchants to sell these items in their stores.

“As a leader in global payments, we have to comply with laws and regulations around the world,” said a PayPal spokesperson.

Square did not return The Daily Signal’s request for comment.

With few options, Terminal Performance then turned to Transnational, a payment processor located in Rosemont, Ill., that is not shy in boasting its support for the Second Amendment.

Although it processes payments for a range of industries, Transnational has capitalized on the trend of payment processors choking firearms merchants from their customer lists.

“Our decision to provide services within the firearms industry mostly is predicated by the fact that we believe through the obtaining of an [federal firearms license] it’s one of the more heavily regulated processes that has good governance and good oversight,” Jae Haas, President of Transnational told The Daily Signal in a phone interview.

Having been in the payment processing business for 16 years, Haas said he’s observed a growing trend of banks and payment processors adding firearms dealers to their “prohibited” or “high-risk” lists.

It’s unclear what role — if any — banks play in how payment processors go about setting their policies.

But the connection between payment processors and banks is inseparable: In order to exchange money from a buyer to a merchant, a bank must process and move that payment.

To do business, payment processors must enter agreements with banks to sponsor its payments.

Square, for example, has a commercial entity agreement with JPMorgan Chase and Wells Fargo.

A business owner using Square is essentially entering an agreement with JPMorgan Chase and Wells Fargo as well.

Haas, president of Transnational, which is sponsored by several different banks, said “there’s no secret” that banks have some influence over payment processors in regards to who they can or cannot do business with, although that influence varies depending on the agreement.

The federal government also may have an outside role in the decision of payment processors not to do business with firearms merchants.

The Daily Signal previously published a series of articles exploring the relationship between banks and the Federal Deposit Insurance Corporation, which is the governmental body responsible for regulating and auditing more than 4,500 U.S. banks.

Republican members of Congress have accused the Federal Deposit Insurance Corporation, among other government agencies, of having undue influence when it comes to banks’ decision not to do business with firearms merchants.

The program, initiated inside the Justice Department, is known as “Operation Choke Point.”

Whether the implications of Operation Choke Point seeped into policy decisions at third-party payment processors is unknown.

When asked by The Daily Signal whether it plays any role in advising payment processors against doing business with gun sellers, an FDIC spokeswoman would not respond, instead pointing to testimony given before Congress in July 2014.

It is the FDIC’s policy that insured institutions that properly manage customer relationships are neither prohibited nor discouraged from providing services to any customer operating in compliance with applicable law…The FDIC has a responsibility to cooperate with other government agencies and to ensure that the banks we supervise are adhering to laws, including those governing anti-money laundering and terrorist financing.

No matter its origin, Blandford hopes the “blatant discrimination” that exists against the firearms industry will come to an end so that in the future, he can enjoy the freedom to utilize “any and all payment processors” in the market.