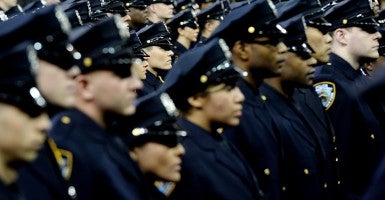 The front-line officers of the New York Police Department appear to be engaged in a work slowdown following the recent executions of officers Rafael Ramos and Wenjian Liu.

In part, the slowdown appears to be a response to an accumulation of anti-police statements and activities by Mayor Bill de Blasio, including controversial comments and an election campaign centered on the alleged racial bias of the NYPD. Aligning himself with the like of Al Sharpton, the notorious racial provocateur, did not help the mayor in the eyes of the NYPD rank-and-file either.

Compared to the same time last year, the number of arrests in the city has steeply declined since the officers were executed, according to the Associated Press. Specifically, “the number of summonses for minor criminal offenses, traffic and parking violations decreased by more than 90 percent compared with the same week earlier.”

Is this slowdown cause for concern? The answer may be yes, given that there is historical evidence that when the police retreat, either through strikes or work slowdowns, crime spikes.

As collective bargaining has spread among police departments, police strikes have become rare since the 1970s. The importance of sustaining police services without interruption has led to statutes prohibiting police officers from striking. Despite statutes prohibiting strikes, police officers have resorted to informal tactics to exercise their displeasure, such has calling in sick and engaging in work stoppages.

Hopefully, the NYPD rank-and-file slowdown will not lead to spike in crime. However, there is anecdotal evidence, in the case of Cincinnati, to suggest that police slowdowns can open the flood gates of crime. In the wake of the 2001 riots in Cincinnati, the police still responded to official calls for help, but they gave up on aggressive patrols and responding to quality of life nuisances. Subsequently, crime spiked in the city.

When the police retreat, criminals not only notice, but they are more likely to take advantage of the situation.

De Blasio’s anti-police rhetoric, such as stating that Eric Gardner’s death was the result of “centuries of racism,” combined with the street protesters calling for “dead cops,” has created an unwelcoming and possibly dangerous atmosphere for NYPD police officers who put their lives on the line everyday protecting law-abiding citizens.

Did this hostile environment cause Ismaaiyl Abdullah Brinsley to kill officers Ramos and Lui? While we will never know the answer with 100 percent certainty, the environment surely did not make such a horrifying act less likely.