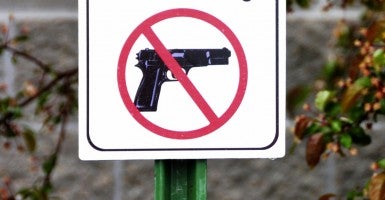 If you can’t get legislation infringing upon the Second Amendment with President Obama sitting in the White House and Harry Reid, D-Nev., running the Senate, the chances of getting much done under the new Republican-controlled Congress are next to nil.

Add to that the fact that the majority of pro-gun control candidates who ran in the 2014 mid-term elections, including Rep. Ron Barber, D-Ariz., who was one wounded in the 2011 incident involving the shooting of then Rep. Gabrielle Giffords, lost.

So, taking a page from the same-sex marriage movement, gun control advocates are now embracing this strategy: What you can’t get done at the federal level, try to get done state by state.

John Feinblatt, president of Everytown for Gun Safety, explained to the New York Times that when advocates of same-sex marriage fought their battle at the federal level, they ended up with the opposite of what they wanted–the Defense of Marriage Act, which defined marriage as being between a man and a woman was passed.  So, what to do?   Feinblatt:  “Then they went to the states and showed that if you can get the majority of the public on your side state by state, that will influence the courts and Congress in the end.”

Now, I take issue with Feinblatt’s statement that “the majority of the public” in individual states supports same-sex marriage. Just consider that in the 34 states that have put it on the ballot, voters in 31 of those states voted to define marriage as the union of one man and one woman.  Only three states went the opposite way.  The redefinition of marriage is being forced on the public via judicial fiats, not voters at the ballot box.

But that aside, what all this means is the battle over gun rights and all the money from the Daddy Warbucks of the movement, former New York City Mayor Michael Bloomberg, could be coming to a state near you.

And it’s not just a state-level strategy that is new: The gun control lobby also has decided to ditch the “control” part of its name.  That is so, well, controlling.  It now prefers to be known as the gun safety movement.

Wonder if that has anything to do with the findings of a Pew poll taken in December, in which 52 percent of Americans said it’s more important to “protect the right of Americans to own guns” than to “control gun ownership.”  Hmmm.

The newly branded “gun safety” movement is now saying that banning assault weapons, a big push that has fallen flat in both Congress and the polls, will take a back seat to the push for expanding background checks–and that polls show Americans support this.

But polls also show that 57 percent believe gun ownership does more to “protect people from becoming victims of crimes” and only 38 percent said it “put people’s safety at risk.”

Interestingly, when you compare those numbers to the same poll taken just two years ago, you see that all the movement in public opinion has been toward the belief that gun ownership protects people. In 2012, just 48 percent agreed with that statement, and 37 percent said it put people at risk. The 16 percent who said they didn’t know or refused to answer two years ago has now dropped to 5 percent, and the deciders have gone heavily towards the belief that gun ownership protects people.

As a conservative, I welcome most political battles being fought at the state level.  The less that Washington is involved in our day-to-day lives the better.

But be forewarned, despite what gun control advocates call themselves or what strategy they use, their ultimate goal is an America where citizens don’t have the right to bear arms.