New Poll: How Many Americans Are Conservative, Liberal? 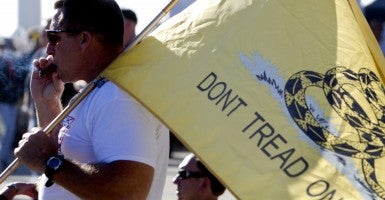 'Don't Tread on Me'' flag is the symbol for the conservative tea party. (Photo: North County Times/Newscom)

Conservatives maintained their stronghold on America’s political leanings this past year, outnumbering those who identify as liberals and moderates in 2014.

Conservatives have been the largest ideological group in the United States since 2009, but the 38 percent who identify as such remained the same as last year’s Gallup poll findings.

Liberals grew by one point to 24 percent, marking the highest percentage in Gallup’s history. The increase shrunk the conservative-liberal gap to a 14 percent difference, the smallest since the poll’s inception in 1992.

The greatest gap was in 1996 with a 22 percent divide between conservatives and liberals.

The number of moderates was unchanged from last year’s survey, falling slightly behind conservatives at 34 percent. Gallup notes this number has dropped from the 40 percent of moderates in 1992.

Independents hit a record high of 43 percent, contributing to the shrink in the number who identify as Democrat or Republican.

Democrats were hit the hardest by the increase in independents, falling from 36 percent to 30 percent. Republicans dropped by two points, down from 2008’s 28 percent to 26 percent.

By the end of year this gap had flipped, likely in response to the Republican midterm election wave. Democrats trailed Republicans by one point from October through December.

The poll surveyed 16,479 adults through landline and cell phones from January to December 2014. It has a margin of error of plus-or-minus one percentage point.