Why Free Community College Is Anything But Free 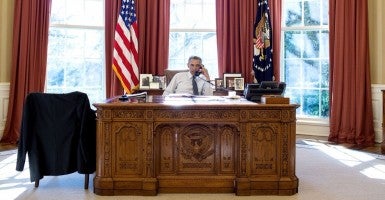 The Obama administration announced Thursday that it will propose two years of “free” community college, paid for by taxpayers, for students maintaining a “C” or better average. The federal government would finance three-quarters of the costs, and the administration says it hopes the remainder would be financed by states.

The White House claims the proposal will save students $3,800 per year in tuition costs. When asked about the cost of the proposal to taxpayers, the administration said it did not yet have a price tag, but that the cost would be “significant,” according to Politico. President Obama is expected to share more details of the plan in his Jan. 20 State of the Union address.

The administration’s proposal begs certain questions. Low-income students already have access to federal Pell Grants, which can be used to finance their tuition obligations at a community college. Indeed, the number of Pell recipients has doubled since 2008. So the proposal will serve as little more than a federal handout to the community college system.

And it’s a system that hasn’t exactly produced stellar outcomes. Just 20 percent of students who begin community college each year complete their program within 150 percent of the standard time, according to the U.S. Department of Education. And, as the Cato Institute’s Neal McCluskey found:

And what is to prevent community colleges from escalating tuition and fees once the federal government – via taxpayers – begins paying the tab? The White House says the federal government will pay three-quarters of the costs of “average” tuition at community colleges, but we’ll most certainly see that “average” increase in the years to come thanks to this new federal largesse.

Then there is the impact on the K-12 system. More than one-third of students have to take remedial courses when they enter college, as they leave high school unprepared for university-level work. Free community college would put even less pressure on high schools to produce graduates who are prepared for college-level work, as they could expect the new free community colleges to fill in what the high schools are failing to do. The proposal is more likely to produce a six-year high school system than a two-year gratis workforce preparation experience.

The administration’s proposal is another step toward the White House’s goal of a “cradle-to-career” education system, starting with free preschool and now free community college. And then, even if a student does accrue debt in this new federally funded free-for-all, the administration has capped loan repayments at 10 percent of discretionary income, and any remaining balance is forgiven by the taxpayers after 20 years. And those benefits are even more generous for individuals who work in “public service,” largely defined as government jobs.

Once again, the administration is pursuing initiatives to subsidize rising costs, instead of working with Congress on policies that actually would address the driver of college cost increases: the open spigot of federal student aid. Over the past several decades, college costs have risen at more than twice the rate of inflation, thanks in large part to federal subsidies.

Allow markets in higher education to work by limiting federal subsidies instead of increasing them, and costs will fall for students attending colleges of all types.