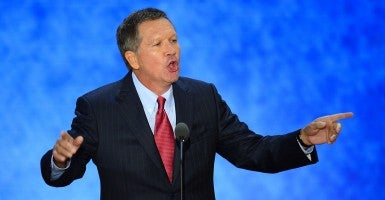 Gov. John Kasich demanded fiscal responsibility and defended his Obamacare Medicaid expansion during a recent speech before the Ohio Chamber of Commerce.

“People, ya know, there’s all this thing about Republicans don’t wanna spend and Democrats do. Conservatives on the Republican side say, ‘We want smaller government.’ Well, go and talk to them about how much smaller government they really want,” Kasich told the year-end gathering of Ohio Chamber members on Dec. 18.

“Ya know, it’s great in theory. But then when you start gettin’ down to makin’ the changes, it gets to be pretty hard,” the Republican governor said. “In our state, I think — I know — that there’s no way we woulda wiped out that $8 billion hole had we not been required to.”

Kasich, who is promoting a federal Balanced Budget Amendment, came into office in 2011 facing a deficit estimated by Lt. Gov. Mary Taylor, the former state auditor, at $8 billion.

Pointing to the $18 trillion national debt, Kasich asked attendees at the Ohio Chamber event, “At what point do things start falling apart? I mean, you can’t keep spending what you don’t have and get away with it.”

Moments later in response to a question about his Obamacare expansion, which has put more than 450,000 Ohioans on Medicaid, Kasich said, “Ya know, I was the first really big-state governor to push this. And now what I find is all these other states are sneakin’ around tryin’ to figure out how to cash in.”

Obamacare’s Medicaid expansion is funded by new federal spending. Ohio soon will exhaust $2.5 billion in Obamacare money appropriated by the Ohio Controlling Board after the Kasich administration warned the state Medicaid program would go bankrupt without it.

“What we’ve seen as a result of this: saved lives, there’s no question about it,” Kasich said.

“Now the overall Medicaid issue in this country, because we’ve expanded, other states expand, how’s the government afford it? Well, all these entitlements need to be reformed, but in the middle of reforming them you just don’t cut off your nose to spite your face and make some declarative statement and then people can’t get any help.”