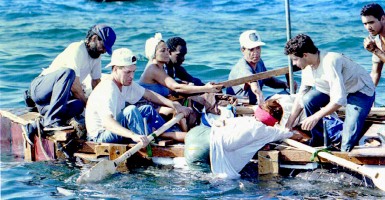 Even as Washington renews diplomatic ties with Havana, hundreds of Cuban refugees continue to flee the Castro regime for America, braving the 90 miles of perilous open sea in crude homemade vessels.

All were summarily returned to Cuban authorities, as were the 481 refugees intercepted just in the month of December—a 117 percent increase since last year, according to the Coast Guard.

On Dec. 17, President Obama announced his administration had reached a deal with the Cuban government, ending a decades-long embargo and renewing diplomatic relations.

Seeking to “extend a hand of friendship,” the president declared that “the United States of America is changing its relationship with the people of Cuba.”

“The administration’s recent announcement regarding Cuba does not affect immigration policies, including wet foot/dry foot or the Cuban Adjustment Act—which only Congress can change,” Korn said.

Until that happens, Korn said, the Coast Guard will continue to “aggressively patrol the Caribbean and Gulf of Mexico.”

Historically, Cuban escape attempts have not been uncommon.

Since then, thousands of Cubans have attempted to reach the Florida coasts in various homemade vessels including rafts, homemade boats and cars converted into sailing vessels.