‘An Attack on Free Speech’: 12 Dead in Terror Assault of French Satirical Newspaper 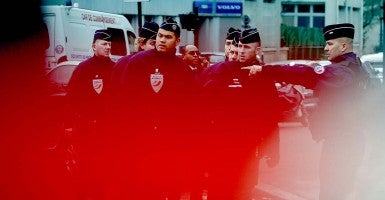 French police officers stand guard near the Paris office of Charlie Hebdo in Paris, France, Jan. 7, 2015. At least 12 people were killed in a shooting at the office. (Photo: Xinhua/Chen Xiaowei)

UPDATE: French police say two suspects in Wednesday’s terrorist attack remain on the run. In a statement on its website, French national police ask for information on the whereabouts of suspects Cherif Kouachi and Said Kouachi—brothers in their early 30s—warning that both could be armed and dangerous. A third suspect, Hamyd Mourad, 18, surrendered to police. The suspects are possibly linked to al-Qaida.

FROM EARLIER: A terrorist attack this morning in Paris has left 12 dead and at least five seriously injured.

According to news reports, three gunmen entered the offices of French satirical newspaper Charlie Hebdo with assault rifles and opened fire on journalists.

Among those slain are 10 Charlie Hebdo staff and two police officers. An injured person gets carried away from the site by a stretcher outside the Charlie Hebdo office. (Photo: Lionel Urman/Newscom)

President Francois Hollande said the attack was “without a doubt” an act of terrorism.

Speaking outside the office of the news publication, he told reporters,  “This is an attack on free speech. No one can harm the spirit of this country which is this newspaper.”

"This is an attack on free speech" – French President Hollande after #CharlieHebdo shooting: http://t.co/CXg48ztABY pic.twitter.com/YZZJzMOQw3

Witnesses say that during the attack, gunmen shouted, “We have avenged the Prophet Muhammad.”

“From the evidence available, this is almost certainly an Islamic terrorist attack at the heart of Europe,” said Nile Gardiner, Director of The Heritage Foundation’s Margaret Thatcher Center for Freedom. “This will be a wake-up call for France and for Europe as a whole.”

After the incident, at least two of the attackers were seen escaping the scene in a car wearing all black and hoods. The attackers are still on the run and there is now a high-security terrorist alert throughout French territory.

Gardiner says the attack underscores the fact that the free world – the U.S. and its allies – are waging a global war against Islamist terrorists. He told The Daily Signal:

The Islamists will strike at any place in the West and we’ve seen terrorist attacks in the U.S., Britain, Spain, and of course now France. The free world has to be on its guard and willing to take the fight to the terrorists.

Charlie Hebdo is known for its provocative cartoons and sartorial jabs against Islam and the Prophet Muhammad. Its offices were firebombed in 2011.

Its pages are filled with vulgar caricatures and caustic humor, lampooning politicians, entertainers and media personalities of all stripes, and the newspaper has found itself a frequent presence at Paris courts, accused on several dozen occasions of defamation or inciting hate.

Such horrible news out of Paris. These attacks against free speech are chilling.

Stéphane Charbonnier, the magazine’s editor-in-chief and cartoonist, was among those reported killed by the Islamist terrorists. He had received death threats in the past and was living under police protection.

In addition to Charbonnier, French media has named three other cartoonists who are believed to have been killed: Cabu, Georges Wolinski and Bernard Verlhac, known as Tignous.

In a statement this morning, President Obama condemned the “horrific shooting.”