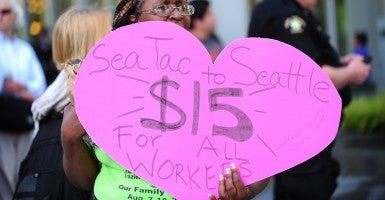 A woman holds a $15 an hour for all minimum wage sign during a march through Seattle. (Photo: Alex Milan Tracy/Sipa USA)

On New Year’s Day, the minimum wage increased in 20 states and the District of Columbia.  This follows a year in which protesters hit the streets in major cities, camping in front of fast food stores and demanding a hike in the minimum wage.

Meanwhile, President Obama storms around the country moaning that Scrooge-like congressional Republicans are refusing to give the American worker a raise.

Liberals say they have intellectual ammunition to support a minimum wage bump. For example, the Labor Department has a website section, “Minimum Wage Mythbusters,” which states: “A review of 64 studies on minimum wage increases found no discernible effect on employment.”   The Labor Department also says that “raising the minimum wage would increase consumer purchasing power” and pump billions of dollars into the economy. This is an economic non-sequitur because every dollar paid to the worker is a dollar less that the small business keeps. So there is no net addition of dollars into the economy.

Fewer than one out of 20 hourly workers overall earned at or below the federal minimum wage in 2013.

Meanwhile, the liberal Center for American Progress has released a study indicating that “the majority of states that raised the minimum wage [in recent years] saw a decrease in their unemployment rate over the next year.

But we wouldn’t expect for a minimum wage hike to cause everyone’s unemployment rate to be affected.

Here’s why: According to the Bureau of Labor Statistics, fewer than one out of 20 hourly workers (4.3 percent) overall earned at or below the federal minimum wage in 2013. And because just under 59 percent of the workforce is paid hourly, the percentage of the workers actually earning the minimum wage is closer to 2.5 percent – or one in 40. It’s simply a myth that a huge number of heads of households work at the minimum-wage level.

But one group is heavily affected by the minimum wage, and that is young people. This is the cohort of workers whom we might expect to observe a change in job opportunities.

In 2013, nearly one in five teen workers (19.5 percent) paid by the hour earned at this level and a much higher percentage started at the minimum wage before they got a pay raise.  In addition, although teens account for just 5.4 percent of the total workforce, they make up 24.2 percent of those earning at or below the minimum wage.

This is just common sense.  Those entering the workforce for the first time, particularly with relatively lower levels of education, have much fewer skills on average. As such, employers are willing to pay only relatively lower “training” wages. If higher wages are mandated, employing less-skilled teens can become unprofitable.

We find that 16-19 year olds often get priced out of the market when the minimum wage rises in states.   From 2009-13, eight states had a minimum wage averaging $8 or higher. In those states the teen labor force participation averaged 35.6 percent. Teenage unemployment averaged 27.2 percent. In the 31 states which did not exceed the federal level, the labor force participation rate was nearly 4 percentage points higher (39.5 percent), and the unemployment rate was nearly 6 percentage points lower (21.3 percent).  These are big statistical differences.

A more complex analysis conducted at Heritage for 2009-2013 for all 50 states and the District of Columbia shows a small negative correlation between labor force participation and minimum wage (-0.14) for those age 16-19. There is a larger positive correlation between teen unemployment and minimum wage (0.36). Over a longer period (1999-2013), the correlations are nearly the same at -0.15 and +0.32, respectively. In short, higher minimum wages correspond with lower labor force participation and increased unemployment amongst teenagers.

Texas A&M University economists Jonathan Meer and Jeremy West published a paper in December 2013 through the National Bureau of Economic Research “indicating that job growth declines significantly in response to increases in the minimum wage…” Additionally, the economists found this decline in jobs growth to be “primarily driven by a reduction in job creation by expanding establishments, rather than by an increase in job destruction by contracting establishments.” The study by Meer and West concluded that “the effect on job growth is concentrated in lower-wage industries and among younger workers.”

During the last federally mandated series of minimum wage hikes from $5.15 to $7.25, teenage labor force participation plummeted from near 41 percent to a low of less than 33 percent as unemployment jumped from near 15 percent to a high of more than 27.4 percent. Yes, the primary cause was the Great Recession. But raising the minimum wage when the economy was contracting was a recipe for disaster for young workers whose wage fell to $0.00.

Sorry, there is no free lunch by hiking the minimum wage.

A version of this piece appeared in Forbes in 2014.