It’s Never a Good Time for a Carbon Tax 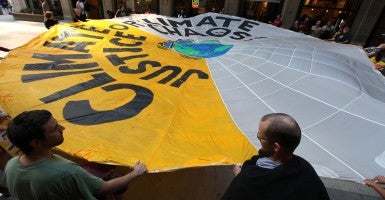 Larry Summers, former treasury secretary and economic advisor to the Obama administration, says low oil prices offer a ripe opportunity to impose a carbon tax. Writing in the Washington Post, Summers argues that conservatives “who believe in the power of markets should favor carbon taxes on market principles.”

We have no idea, of course, how long oil prices will remain low. But it doesn’t matter.  Cheap oil is no excuse for bad policy. A carbon tax is not a market-based policy and will be a huge economic loser without making a dent in global warming.

Why Carbon Reduction Should Not Be a Policy Goal

Proponents of a revenue-neutral carbon tax argue it will clean up our dirty power plants next to a PowerPoint slide of a power plant spewing out black smoke. Summers does this in his article, writing that carbon dioxide emissions “contribute to local pollution problems that harm human health.”

The problem is carbon dioxide reduction has nothing to do with the reduction of hazardous air pollutants or particles that cause direct and measurable adverse public health impacts. Yes, the burning of conventional fuels does emit pollutants, but regulations already exist to account for the “full cost” of energy use. But the reason for regulation of colorless, odorless, non-toxic carbon dioxide is because it allegedly contributes to greenhouse gas accumulation and thus to global warming that will result in harmful effects to human health and the environment.

There is broad agreement, even among those labeled as skeptics, that the earth has warmed moderately over the past 60 years and that some portion of that warming can be attributed to anthropogenic carbon dioxide emissions. But there is no consensus that temperatures are increasing at an accelerating rate or that we are headed toward a climate catastrophe. In fact, more evidence is emerging that the earth is significantly less sensitive to a doubling of carbon dioxide emissions than suggested by the climate models the federal government relies upon to project warming centuries out to the future.

Scientists have been unable so far to find data demonstrating we’re actually in a climate crisis. Wildfires, hurricanes and other extreme weather events are immediate crises, but the planet is not experiencing more frequent and intense extreme weather events. The latest report on the science from the Intergovernmental Panel on Climate Change and analysis provided by the Obama administration’s National Climatic Data Center find no significant trends for floods, droughts, hurricanes or tornadoes.

The climate reality is only one side of the climate coin. The ineffectiveness of a carbon tax in mitigating warming is the other. Summers argues a carbon tax will combat climate change and send a message to the rest of the world to follow suit. But the reality is the United States effectively could bring all economic activity to a halt and cut carbon emissions to zero in the U.S. and still lower average temperatures by no more than 0.2 degree Celsius by 2100.

Furthermore, the developing world is not going to follow America’s price-increasing, job-killing path. Yes, China committed to carbon emission reductions far into the future, but the Obama administration is unilaterally imposing regulations that will drive up energy bills and reduce economic competitiveness today. Furthermore, China and India have hundreds of millions without access to electricity. The commitment and pressing issue for these developing economies should be to give their people a better standard of living, not reduce carbon emissions.

A Carbon Tax Is a Massive Economic Loser

Although Summers has argued for a carbon tax when oil prices were high, part of Summers’ argument in his most recent op-ed is that Americans can now afford a carbon tax. He writes:

“Those who drive long distances to work, say, or who have homes that are expensive to heat would be disproportionately burdened. Now that these consumers have received a windfall from the fall in energy prices, it would be possible to impose substantial carbon taxes without them being burdened relative to where things stood six months ago.”

Summers significantly downplays the damage a carbon tax would impose. Levying a price on carbon dioxide will directly raise the cost of electricity, gasoline, diesel fuel and home heating oil. An overwhelming majority of America’s energy needs are met by carbon-emitting conventional fuels. And since low-income families spend a larger proportion of their income on energy, a tax that increases energy prices would disproportionately affect the budgets of the poorest American families.

The direct hit is just a small part of the story. Energy is a necessary component for just about all of the goods and services consumed, so Americans will pay more for food, healthcare, education, clothes, cleaning supplies – you name it. A carbon tax would act as a vise – squeezing both the production and consumption ends of the economy. Using the same model as the Energy Information Administration, we modeled what a carbon tax equivalent to the federal government’s social cost of carbon estimate would do to the economy between 2015 and 2030 and found:

Proponents of a carbon tax will argue that we’ll rebate that money back to the people. It doesn’t matter. All taxes are not created equal, and revenue generation is just one impact of a tax. Deadweight loss is another.  My colleague David Kreutzer used this example to differentiate between the two in his September testimony:

Suppose there is a $3 million-per-gallon tax imposed on dairy products, and with this tax in place a single gallon of ice cream is purchased each year.

The tax revenue (direct burden) is $3 million. The excess burden is the value lost by destroying the dairy industry—farmers, processors, and vendors, etc.—minus any gains by those who produce and sell whatever substitutes replace a portion of the lost dairy products.

In addition the excess burden would include the lost value to consumers who give up ice cream, milk and cheese, etc., for less-appealing alternatives.

A carbon tax will raise revenue, but the lost economic well-being mentioned above would be catastrophic. In fact, in our analysis, all of those losses occur under the assumption of revenue neutrality.

That is, we can give the carbon tax revenue back to the people, but on net, families are still much worse off because the economic pie is much smaller.

What about Potential Trade-offs?

But who cares if carbon dioxide isn’t a pollutant? What if we can strike a deal that gets rid of the capital gains tax and the EPA’s climate regulations on new and existing power plants and puts in place a modest carbon tax? After all, capital gains taxes carry huge deadweight losses, and the EPA’s climate regulations are heinously complex – a carbon tax would be much more efficient and appease the environmentalists.

The environmentalists would get what they want. Except they wouldn’t. Just in case there is any confusion as to whether the left is willing to trade off regulation for a carbon tax, former Rep. Henry Waxman, D-Calif., recently cleared things up: “A carbon tax or a price on carbon would be a strong incentive for the development of new technologies. But because it’s so complicated, I would not support pre-empting EPA. EPA can assure us that we can actually get the reductions we need.”

When it comes to capital gains tax reduction, the political infeasibility of such a swap should be enough to squelch those talks. What member of Congress will be willing to drive up the heating and air conditioning bills of the poor and elderly to cut Goldman Sachs’ tax rate by a few percent? Good luck.

OK, but what if there were no elections to worry about and no Henry Waxmans as well? We’re all just focused on good policy. If that’s the case, let’s just cut the taxes on labor and capital and not have a tax on carbon. Why is the deal always “We’ll agree to support one of your new wrongheaded policies if you offer to lighten up a little on one of your old wrongheaded policies?”

Here’s a better deal: Let’s cut the taxes we don’t like and in turn everyone will get more economic growth, more jobs with higher wages and a better standard of living for all Americans. Such a policy will provide the world with more wealth and resources to tackle the problems of the future, whether they’re climate-related or not.