Why So Many Republicans Wouldn’t Vote for Boehner as Speaker 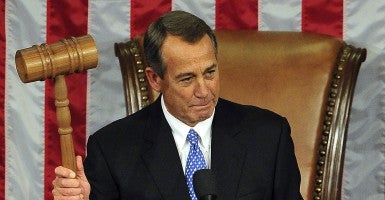 Today, John Boehner won the job as speaker of the House for the new 114th Congress.

He won the job despite by surviving the most divisive speaker election in more than 100 years.

According to a report by the Congressional Research Service looking at House speaker races from 1913 to 2013, no other speaker has experienced the level of disapproval from his own ranks that Boehner has.

And only once, in 1923, did a candidate not get the votes needed to win on the first ballot.  Rep. Frederick Gillett, a Republican from Massachusetts, finally won election on the ninth ballot after “progressive” members of the Republican Party gained a number of concessions in exchange for their votes.

Fast forward to today where Boehner won on the first ballot with 216 votes, thereby becoming the fifth speaker not to win a majority of the full House membership. With more than 20 House Republicans voting against him today, Boehner wins the honor of having more members of his own party vote against him than any sitting speaker in recent history.

>>> Meet the 25 Republicans Who Did Not Vote for John Boehner

That’s not a helpful trend line but it’s one, unfortunately, the newly re-elected speaker has earned.

Following an election where Republicans increased their seats in the House and Senate in no small part by promising to repeal Obamacare, the big ideas being announced by GOP leadership just days before taking office were repealing the medical device tax and “fixing” a provision of the employer mandate, redefining a full work week as 40 hours as opposed to the 30 hours Obamacare called for.

I dare say that millions of Americans who have lost their health care or seen their premiums skyrocket because of the unaffordable Affordable Care Act are wondering why the GOP is more focused on a medical device tax than them. And why not repeal the employer mandate altogether as opposed to picking and choosing which employers (and employees) will still have to live under the onerous law?

After all, a December poll found that 58 percent of people said if they were given the opportunity to vote only on whether to keep the 2010 health care law in place or repeal it, they would vote to repeal it.  That should be a sign to Boehner and others in the GOP leadership that they would be rewarded for being bold on health care instead of tinkering with bits and pieces of the legislation.

Then there were the shenanigans in the lame-duck Congress following the November election where Boehner not only oversaw the passage in the House, but by many accounts railroaded through, a $1 trillion, 1,000-plus-page omnibus spending bill while giving lawmakers less than 72 hours to read it.

Remember when that was one of the complaints against Obamacare – that then-Speaker Nancy Pelosi, D-Calif., rammed through massive legislation without giving members, much less the American people, time to read it and consider it?  We were told things would be different under Republicans, yet a growing number of Americans and members of the House GOP are having a tough time figuring out what part of that scenario is now different.

Many also are questioning whether Boehner will sincerely carry out his promise to fight President Obama “tooth and nail” to stop him from creating his own laws when he can’t persuade Congress to pass them – most recently in the case of Obama granting de facto amnesty to millions of people in the country illegally.

Since Congress holds the purse strings and has the power to fund or not to fund government departments and activities, one would think not funding the parts of the government that would be charged with enacting Obama’s royal amnesty decree would have been a pretty good “nail” for the GOP to use to put a stop to such actions.

But no. As of this writing, the Department of Homeland Security is fully funded through early 2015 with “talk” of revisiting the issue now in the new Congress.

When this is how you start the game, the people in the stands and your fellow teammates start questioning not just the play calling but the play callers themselves.  That was on display today.