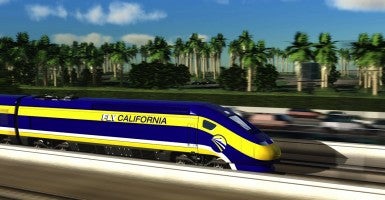 Talk about a trainwreck.

The project is estimated to cost $68 billion. The plan is that the private sector will ultimately invest around one-third of the total cost, but so far, there have been no takers.

And it’s no wonder. It’s hard to see how this project makes sense.

Backers say the train will be able to make the trip between San Francisco and Los Angeles in under 2 hours, 40 minutes. However, according to a 2013 Reason Foundation study, it’s likely the trip will ultimately take around four hours (and sometimes closer to five hours) for various reasons (for example, the high-speed train will share tracks with slower trains).

To put that into context, consider this: A flight from San Francisco to Los Angeles is about 1 hour, 15 minutes. Driving, if there isn’t traffic, takes a little under six hours—more time than the train would take, but you also have a vehicle at the end of your trip. (Neither San Francisco nor Los Angeles are cities easy or convenient to navigate via public transit, although San Francisco certainly has more options than Los Angeles.)

So in other words, it’s a $68 billion project to build a method of transit that combines the longer time of driving with the lack of convenience of flying (that is, arriving without a car).

And this is all assuming the full project is completed. Currently, the state has only $12.6 billion—from federal funding and a voter-approved bond measure—ready for the project.

The first steps will lead to tracks connecting Fresno and Bakersfield—two cities that have no public transportation other than buses. It’s hard to see why a big market of people would be looking to take the high-speed train between these two places, which are already connected by highways and train.

Furthermore, it’s possible that the high-speed rail train, rather than making a profit or breaking even, will lose even more money when operating. Remember, that $68 billion is just to build it.

From the 2013 Reason Foundation study:

Even if the system managed to equal European train ridership levels it would hit just 7.6 million rides a year. Thus, ridership in 2035 is likely to be 65 percent to 77 percent lower than currently projected.

As a result of these slower travel times, higher ticker costs and low ridership, California taxpayers should expect to pay an additional $124 million to $373 million a year to cover the train’s operating costs and financial losses.

California’s struggling enough as is. Building a costly high-speed rail train with few obvious consumers is a mistake—and one that will likely cost taxpayers dearly.