The 25 Republicans Who Did Not Vote for John Boehner 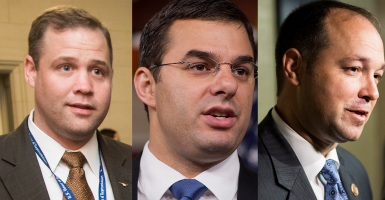 Jim Bridentstine, R-Okla., Rep. Justin Amash, R-Mich., and Rep. Marlin Stutzman, R-Ind. were among the republicans who did not vote for Boehner. (Photos: Newscom)

House Speaker John Boehner was elected to his third term as the No. 1 Republican in the lower chamber, but not without resistance from more than two-dozen fellow GOP lawmakers.

Republicans needed 29 defectors to defeat Boehner. Twenty-five lawmakers did not vote for the newly elected House Speaker, the most no votes cast against a speaker in the last century. One of those members — Rep. Brian Babin of Texas — voted “present,” which lowered the threshold for the number of votes Boehner needed to win the speakership.

Meet the 25 Republicans who did not vote for newly elected @SpeakerBoehner.

Rep. Jim Jordan of Ohio also won two votes, though he was not officially nominated. Nine others received votes.

Here are the 24 GOP lawmakers who did not vote for Boehner, as well as Babin.