Talking About Rape Is Now Too Controversial at Harvard Law 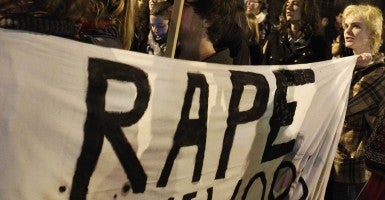 Sexual violence in the context of criminal law is now considered too disturbing to study for students attending the nation’s most prestigious law school.

According to Jeannie Suk, a professor at Harvard Law School, the accentuation of rape culture has forced her and other law professors to tread carefully while discussing rape law with students.

In a recent column for The New Yorker, Suk explained the decision many law professors now face to eliminate the subject of rape from their curriculum due to the hypersensitivity of individual students.

“Imagine a medical student who is training to be a surgeon but who fears that he’ll become distressed if he sees or handles blood. What should his instructors do?” wrote Suk, adding that “Students seem more anxious about classroom discussion, and about approaching the law of sexual violence in particular, than they have ever been in my eight years as a law professor.”

According to Suk, the consequence of omitting rape law from law school curriculum is the absence of instruction on laws concerning consent, the various classifications of sexual violence, and the extraction of information in cases of rape or sexual assault.

Suk says the study of rape law is especially critical now since attempts to reform laws regarding sexual assault on college campuses have become a topic of national debate.

“Now more than ever, it is critical that law students develop the ability to engage productively and analytically in conversations about sexual assault,” wrote Suk. “Instead, though, many students and teachers appear to be absorbing a cultural signal that real and challenging discussion of sexual misconduct is too risky to undertake—and that the risk is of a traumatic injury analogous to sexual assault itself.”

Student requests for “trigger” warnings have begun to spread from undergraduate classrooms to law schools, according to Suk.

She says “student organizations representing women’s interests now routinely advise students that they should not feel pressured to attend or participate in class sessions that focus on the law of sexual violence. … [T]hese organizations also ask criminal-law teachers to warn their classes that the rape-law unit might ‘trigger’ traumatic memories.”

>>> Should Colleges Warn Students That Courses May Include Upsetting Material?

In response to Suk’s column, Susan Kruth, a lawyer with the Foundation for Individual Rights in Education, wrote that it “defies reason to exempt discussions of rape, perhaps the second-most serious crime, from what is intended to be a meaningful survey of the law.”

“Is the point of law school to make future lawyers feel comfortable, or is it to enable them to be zealous advocates for their clients, who may include victims of rape and other crimes?” asked Kruth.