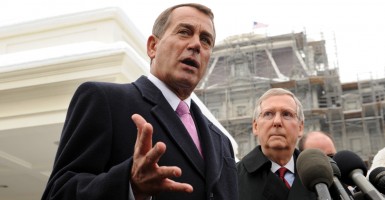 Republicans’ trust in GOP leadership is dwindling, according to a poll conducted by EMC Research in the days leading up to 2015.

The national survey of more than 600 Republican voters found a majority wary of embracing incumbent House Speaker John Boehner of Ohio and incoming Senate Majority Leader Mitch McConnell of Kentucky. (Full results at the end of this story.)

Boehner, who will face a challenge from members of his own party in Tuesday’s speaker vote, fares worse than McConnell in the poll. Sixty percent of Republican voters say they want someone new rather than Boehner.

A majority of respondents appeared unimpressed with Boehner’s overall job performance since he assumed the position of House speaker in 2011. When asked about his record, 64 percent said Boehner has been “ineffective in opposing President Obama’s agenda.”

Boehner has a 43 percent favorability rating with Republican voters. However, 52 percent of respondents said they “trust Speaker Boehner to fight for the issues that are important to most Republicans.”

Eighty-one percent of respondents cited opposition to Obamacare as the reason they voted for a Republican.

In late November, Boehner filed a lawsuit on behalf of the U.S. House of Representatives against Obama’s executive actions on Obamacare.

“Time after time, the president has chosen to ignore the will of the American people and rewrite federal law on his own without a vote of Congress,” Boehner said at the time the lawsuit was filed.

Those two issues were cited by Rep. Louie Gohmert, R-Texas, as reasons he wants to be speaker. Gohmert will challenge Boehner on Tuesday when the 114th Congress convenes.

Gohmert joined Reps. Jim Bridenstine of Oklahoma, Thomas Massie of Kentucky and Ted Yoho of Florida as members on the record opposing Boehner’s re-election as speaker. Yoho also offered himself as an alternative.

Two years ago, a dozen Republicans voted against Boehner, although no other Republican officially declared his or her candidacy. Despite the different dynamic this year, Boehner remained confident in his ability to retain the job.

In a statement provided to The Daily Signal, Boehner spokesman Michael Steel said, “Rep. Boehner was selected as the House Republican Conference’s choice for speaker in November, and he expects to be elected by the whole House next week.”

The full results from the EMC Research poll are below.