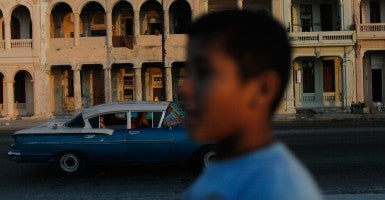 Topping the list, of course, are the people of Cuba. They are starting from a bad place, lacking fundamental freedoms. And Obama negotiated no promises from the Castro brothers to ease up on the repression.

That leaves Cubans saddled with the second-most-repressive economy in the world, according to “The 2014 Index of Economic Freedom,” published by The Heritage Foundation and The Wall Street Journal.

It offers no relief from the Freedom House assessment of Cubans’ political rights and civil liberties — “Not free.” It leaves them mired in 170th place — out of 180 countries — in Reporters Without Borders’ rankings of press freedoms.

The claim that opening markets will transform Cuba is utterly bogus. The kleptocracy that runs the country will figure out how to exploit every dollar that flows in — just as it has managed to funnel every incoming cent of foreign money through the government sieve. Opening a new cash flow will only allow the regime to further enrich itself and dig in deeper.

Opening markets cannot magically transform totalitarian regimes into democracies — at least, not as long as the rulers maintain a stranglehold over civil society.

Look at China. The ruling elite has embraced many free market policies, yet freedom is waning on the Chinese mainland, and Beijing is now squeezing it out of Hong Kong, too.

Or consider Russia. It, too, embraced Western economic reforms after the Cold War. Yet President Vladimir Putin resurrected strongman rule and has turned his country into a Gulag Lite.

Does anyone seriously believe that tourists buying cigars in Havana will convince the Cuban cabal to change its ways?

Sure, some U.S. companies will turn a profit doing business in a country under the thumb of thugs. But they could just as well make that money elsewhere.

If the Obama administration were really interested in boosting American business, it would cut needlessly costly regulations, reform the tax code and green-light initiatives like the Keystone XL pipeline that can generate American jobs and reduce consumer prices here at home.

Instead, America loses under this decision. It strengthens an odious regime that aids our enemies. Cuba encourages and supports some of the most anti-American countries on Earth, from Venezuela and Iran to North Korea.

Just last year, authorities intercepted a ship bound from Havana and purportedly bearing a “humanitarian gift of sugar from Cuba to the North Korean people.” Hidden under the sugar were other gifts, including fighter jet parts, missile components, rocket-propelled weapons and ammunition.

America also loses because presidents are not supposed to take steps counter to the intent of current U.S. law without at least consulting Congress.

Not only did Obama not work with Congress on this matter, he waited until Congress had adjourned and left town before announcing he was going to “normalize” relations with Cuba.

Coming on the heels of his end-around action on immigration — extending executive amnesty to millions of illegal immigrants — the Cuban gambit destroys any chance of lawmakers working with the Oval Office in trust and confidence for the next two years.

Finally, America loses because Obama’s deal with the dictators betrays the very thing that has made ours a truly exceptional nation.

“Unlike other nations that derive their meaning and purpose from some unifying quality — an ethnic character, a common religion, a shared history, an ancestral land — America is a country dedicated to the universal ideas of equality and liberty,” writes constitutional scholar David Azerrad.

The premise of our existence is that only government of, by and for the people is truly legitimate. When Obama embraces the Cuban regime with a sham freedom agenda, he turns American exceptionalism into American hypocrisy. Freedom-loving Cubans deserve far better than that.