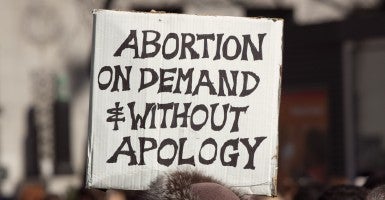 Planned Parenthood performed 327,653 abortions in 2013—all while accepting hundreds of millions of dollars in taxpayer funds.

The organization recently released its 2013-14 annual report, highlighting the “building momentum” and the “explosion of engagement” within Planned Parenthood.

“In 2014, Planned Parenthood expanded our reach—and deepened our impact—providing the health care and education that help millions of people pursue their dreams and realize their full potential, and advocating for full access to and equality in reproductive health care,” the report states.

According to the statistics in the report, the 327,653 abortions comprised 94 percent of Planned Parenthood’s pregnancy services, which also include prenatal care and adoption referrals.

While the number of abortions performed by the organization increased, Planned Parenthood’s other services, such as cancer screenings, prenatal care and contraceptive services decreased.

Planned Parenthood also distributed 1,440,495 “emergency contraceptive kits.” Opponents of these drugs say they are an abortifacient, terminating a fertilized egg, thus ending a pregnancy and a life.

“The abortion rate may be declining across America, but not in Planned Parenthood clinics,” Marjorie Dannenfelser, the president of the pro-life Susan B. Anthony List, said in a statement.

Their latest annual report is fresh evidence that Planned Parenthood remains an abortion-centered, profit-driven business. In 2013, Planned Parenthood upped the number of abortions they performed to 327,653. Meanwhile, their already limited cancer screenings, prenatal services, adoption referrals – and even contraception services – continue to drop. Planned Parenthood claims to be an altruistic health care provider for women and girls but their bottom line is all about abortion.