This Photo Inspired a Book, Film and Pro-Life Message Across the Globe 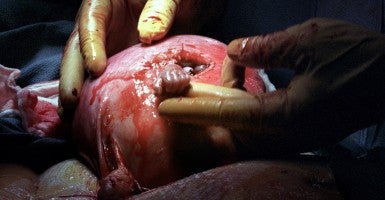 For the Armas family, one picture meant much more than a thousand words.

In August 1999, doctors diagnosed Samuel Armas—who was still in his mother’s womb—with spina bifida, a congenital disorder that causes deformation of the spinal cord. To prevent her future son from suffering severe neurological damage, Armas’s mother, who was 21 weeks pregnant when the diagnosis was received, underwent prenatal surgery.

Photojournalist Michael Clancy was sent by USA Today to document the unique procedure, which had been introduced less than two decades prior.

During the surgery, Clancy witnessed something remarkable.

“Suddenly, an entire arm thrust out of the opening [of the exposed uterus], then pulled back until just a little hand was showing,” Clancy wrote on his personal blog. “The doctor reached over and lifted the hand, which reacted and squeezed the doctor’s finger. As if testing for strength, the doctor shook the tiny fist. Samuel held firm.”

Fifteen years later, the iconic photograph Clancy captured during that moment continues to inspire hope across the globe.

Photojournalist Michael Clancy, who identified as pro-choice prior to taking the photo, has since joined the pro-life crusade.

Former Arkansas Gov. Mike Huckabee featured Samuel’s story in a 2011 film, “The Gift of Life.” That same year, Clancy published his book, “Hand of Hope: The Story Behind the Picture,” which described the surgery as he remembers it and refutes claims made by the doctor who performed the procedure, Joseph Bruner, that he pulled Samuel Armas’ hand out of the uterus.

According to a report by Fox News in 2009, the picture, which has come to be known as the “Hand of Hope,” was “cited during congressional debates on the Partial-Birth Abortion Ban Act” in 2000 and has encouraged Samuel and his mother to champion a pro-life message.

Clancy, who identified as pro-choice prior to the surgery, has since joined the pro-life crusade to protect the right to life of unborn children and has taken his message to expectant families overseas.

“I shared my story at over 150 events in [three] countries from 2007 to 2012,” wrote Clancy. “It was an incredible blessing taking the picture and being able to share my story with so many people over the years.”